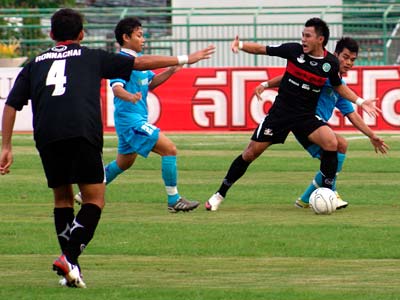 PHUKET: FC Phuket strengthened their grip on the Football Association of Thailand’s Division Two (South section) title with a hard-fought 2-0 win over second-placed Trang at Surakul Stadium on Saturday.

With a game in hand, FC Phuket were two points ahead of Trang going into their first home match since the mid-season break.

FC Phuket dominated possession in the first half, but were unable to break through the Trang defence.

The second half began with a series of FC Phuket corners and the breakthrough finally came in the 50th minute, when Camara Ahmed pounced on a clearance pass and found the top corner of the net from 25 yards.

FC Phuket continued to press and added a second goal in the 75th minute, when Nene Bi rose highest to meet a long-range free kick with a header that beat the Trang keeper at the near post.

With some unsteady play in the net, FC Phuket seemed lucky to walk away with a 2-0 win, though manager Arjan Songsamssub pronounced himself pleased with the performance.

“I am very happy because Trang were the second-placed team and if they had won they would have overtaken us. The new players are just starting to learn the system and how we play the game, but I think they will fit in well. Camara’s long shot was beautiful and it was his first goal for FC Phuket,” he said.

For the adventurous, FC Phuket play away at Pattani next Sunday.

The Southern Sea Kirin will be back in action at Surakul Stadium against Yala on July 18.

For a full match summary, pick up the next issue of Phuket Gazette at a newsstand near you.