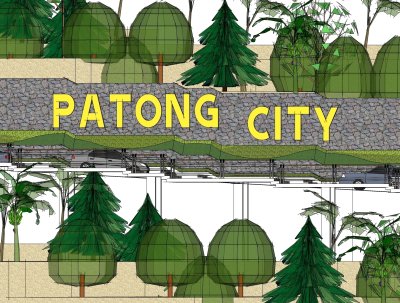 PHUKET: A wide majority of Phuket Gazette online readers think the project to build a welcome sign on Patong Hill is a waste of taxpayer money, the latest Readers’ Poll has revealed.

Readers were asked on June 21 which of three statements most accurately matched their view of the 9.1-million-baht project, funded under the central government’s Thai Khem Khaeng (Strong Thailand) fiscal stimulus package.

Overall, 79.7% of the 433 respondents who took part said they thought the sign was a waste of taxpayer money.

This was more than seven times greater than the 7.4% of respondents who thought it was a good use of tax revenue.

Another 12.9% chose the third response: ‘Undecided. I’ll wait until I see the finished sign.’

Of the respondents, those who identified themselves as ‘local foreign residents’ were the most pessimistic, with 86% saying the project was a waste of funds compared with just 4% who said it was a good use of government funds.

Among people identifying themselves as Thai, 69% said they thought the project was a waste compared with 11% who thought it was a good use of funds.

A similar trend prevailed among respondents identifying themselves as ‘tourists or visitors to Phuket’, of whom 68% said the project was a waste of funds compared with 14% who thought it was money well spent.

Thais and tourists were more likely than their expat counterparts to reserve judgment until the project is completed. About 20% of people in both groups chose the third option, about twice the number of people identifying themselves as foreign residents.

A total of 433 people took part in the poll: 280 local foreign residents, 108 tourists and travelers and 45 Thais.

Readers also posed a total of 105 comments on the topic.

A reader who identified himself only as ‘Ekachai’ commented, “Patong needs proper running water and all the electrical wiring tidied up before 9 million baht is spent on a sign. It is so embarrassing and dangerous for tourists walking around Patong with wires hanging down everywhere, and transformers exploding whenever there is a storm. Please fix this first before the big sign.”

Others commented sarcastically that the sign would likely be washed away in a landslide, while others wrote in that work on the project would worsen driving conditions on the Patong Hill road.