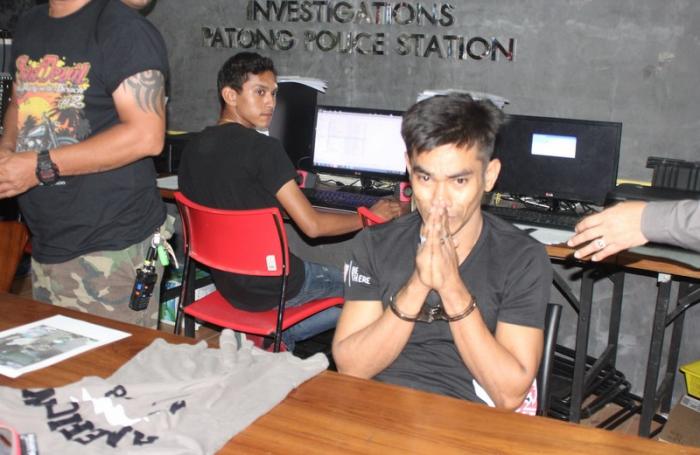 PHUKET: Patong Police yesterday arrested a Pattani man for rape, impersonating an officer of the law, robbery and house encroachment.

Col Somsak led a team of officers to arrest him at the ‘Best Store’ hotel in the China Town area at about 8pm. They found drug paraphernalia in his room.

“On Wednesday, a 33-year-old masseuse, who requested that her name be withheld, filed a complaint against Mr Russanee. She said that while she was walking past Patong Hospital, a man came to her and solicited her services for 4,000 baht. She said she did not doubt his intentions as she believed him to be a police officer,” said Col Somsak.

“She went with him on his motorbike and said he took her to a forest on Phra Paramee Road, forced himself on her and robbed her of 2,000 baht,” he added.

Another masseuse had filed a similar complaint last Saturday.

“The second victim, who also asked that her name be withheld, said that while she was sleeping in her room in Patong, a man barged in, claimed to be a police officer and forced himself on her. However, as her daughter was also in the same room, he didn’t go through with it and instead stole 1,500 baht and ran away,” said Col Somsak.

“We checked CCTV footage in the areas where the incidents occurred. After learning the suspect’s identity and confirming his involvement in both cases, we checked his previous records and learned that he had a prior conviction of rape and had just been released from prison last year,” he added.

Both victims confirmed the suspect’s identity after police showed them a photograph. Officers then issued an arrest warrant for him.

“Mr Russanee said the reason he chose masseuses as victims was that he did not believe they would dare to file an official complaint. He also confessed to using the money to buy drugs,” said Col Somsak.

“We want to warn the public to be careful of any person claiming to be a police officer. Please ask to see the officer’s ID every time. If you suspect anything amiss, call 191 immediately,” he added.