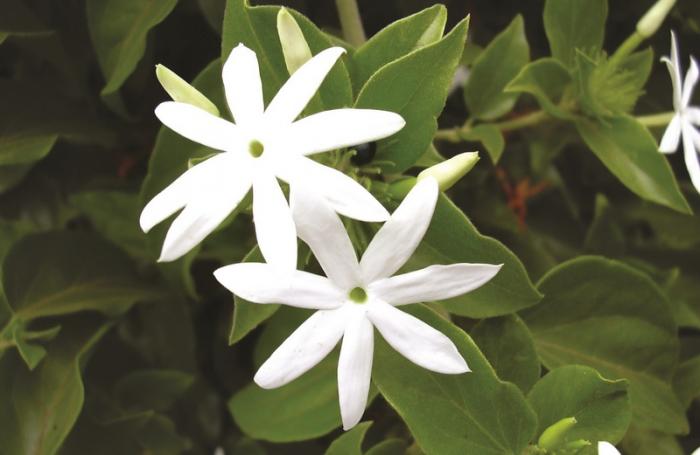 PHUKET: One of the more fascinating aspects of writing this column is that it brings you into contact with members of the local gardening fraternity. Some of the questions they pose are quite teasing. Take Chris, who sent me a photograph of a pot plant which has suddenly and inexplicably decided to bloom.

He says, “I never really cared about it, but now it is flowering so I would like to know what it is.”

First, a general point about plants that decide to burst into flower after a fallow period. The likely explanation is that conditions have changed. If the soil, location or provision of water and food are not right, many plants will refuse to expend extra energy on blooming. Of course, many plants are remarkably unfussy and will tolerate poor conditions, which are more likely to occur in the confines of a container than in open ground.

I digress. Chris’s plant had a solitary, five-petalled, white star-shaped bloom. My initial reaction was to say jasmine, but the leaves were not right for jasminium multiflorum or rex, both of which possess conventionally pointed leaves. These looked glossy and rounded, a characteristic which suggested stephanotis floribunda, sometimes known as the creeping tuberose or Madagascar jasmine. In favorable conditions, it will twine and climb and will produce clusters of starry flowers. But stephanotis is quite a difficult subject and will only flower profusely with plenty of tender, loving care.

There is another plant which also appears to fit the bill. The single bloom in the photograph more closely resembles that of another evergreen shrub known as carissa grandiflora. Not a climber, what it has in common with stephanotis, apart from a white five-petalled flower, is dense, evergreen foliage which has similar leathery and rounded leaves, it is also known as a Boxwood Beauty.

There are important distinctions between stepanotis and carissa which will help Chris to make a definitive identification. Unlike the twining tube rose, carissa is low growing, often forms a clump, and the leaves are paler underneath. It can be used as a low hedge or barrier. It likes full sun and its somewhat tubular blooms rarely appear in shady conditions. Indeed it is drought tolerant. Perhaps Chris has moved the container; maybe the sun’s change of direction has increased the amount of light the plant is now getting.

There are other differences. Carissa, in common with all other members of the apocynaceae genus, exudes a milky latex when the stems are broken and it produces red or magenta berry once flowering is over. Hence it’s other name of natal plum.

So there you have my opinion – for what it is worth. Chris’s plant may of course be neither of these fellows, but at least we have uncovered a few clues.

If you have gardening or environmental concerns, contact Patrick at drpaccampbell@ gmail.com. Many of his creative and academic publications can be found at his website: Green galoshes.