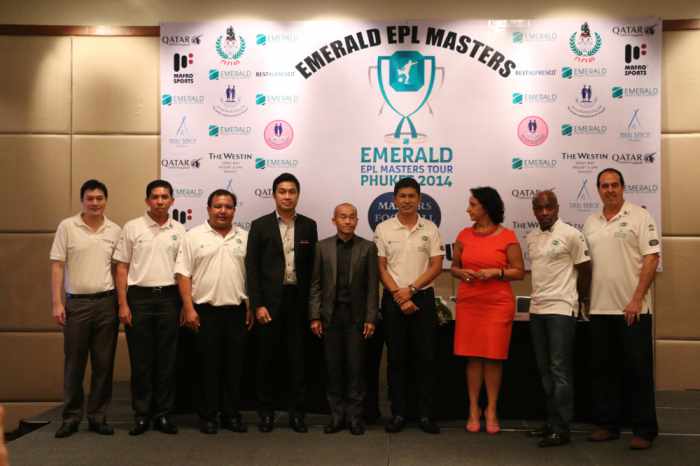 PHUKET: They might be past their prime, but still have a lot to prove to themselves, their fellow footballers and the spectators.

“Once you’re on the pitch, the fighting spirit kicks in and you give your best. These guys don’t want to make fools of themselves,” says Paul Parker, former Manchester United player, and member of England’s national football team, who will lead the EPL All Stars team in a match against the Thailand Legends on Sunday, August 10 in Phuket Town.

Players from Premier League teams, among them David James from Liverpool, Arsenal’s Michael Thomas, Rob Lee of Newcastle and more – all over 35 years old, will make up the EPL All Stars team who will face the Thai Legends team, which is expected to feature home grown players such as Piyapong Piew On, Wangchan, Chaikaew and others.

The event, organized by Masters Football Asia in partnership with Emerald Phuket Development, will take place at Surakul Stadium, home of Phuket FC, and is endorsed by the Football Association of Thailand and the Phuket Provincial Sports & Tourism Authority.

Paul Parker is confident that the decision to host this kind of event in Phuket is the right one.

“Most of such events happen in the capital, and sure, people in Bangkok love football, but so do people in other regions and all these smaller cities and provinces miss out. I think that the appetite here is bigger than in Bangkok, where people have a lot of football, lot’s of sports and are spoiled.

“Who’s to say, that there won’t be another event, maybe some current players coming as well. Phuket might take this chance and bounce off to another level,” says Parker about the future of sporting events in Phuket.

There are 15,000 seats in the stadium waiting to be filled. Tickets go on sale Friday, June 13 and will be available at the stadium, Tiny Coffee and Tiny Mart outlets at Shell petrol stations as well as Honda, Ford and Mazda car dealerships across the island. The prices start at 200 baht and go up to 2000 for VIP seats.