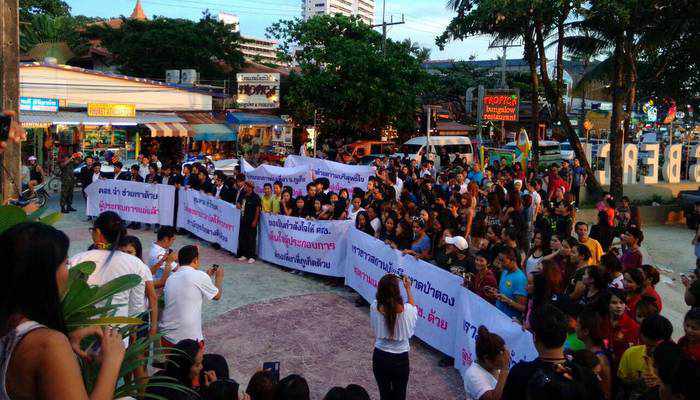 PHUKET: Governor Maitri Inthusut paid a visit to Phuket’s premier party town last night to personally receive a formal request from Patong nightlife venue operators for the curfew to be lifted, and assure them that progress was being made to further relax the curfew.

The governor was greeted by hundreds of business operators at about 7pm, many of whom were wielding signs imploring him to ask the National Council for Peace and Order (NCPO) to have sympathy for the entertainment industry.

“Many nightlife venues have started opening at 6pm to make up for revenue lost at night, but customers just aren’t coming in that early.”

Gov Maitri told the crowd that there was nothing further he could do, as he had already asked coup leaders for curfew flexibility in Phuket (story here).

“I have already presented our request to Army Region 4 Commander Walit Rojanapakdi and to officers of the Ministry of the Interior,” said Gov Maitri. “The NCPO understands our problem and is concerned about tourism.”

Gov Maitri hinted that he had heard unofficial news yesterday that the curfew would be lifted soon (story here).