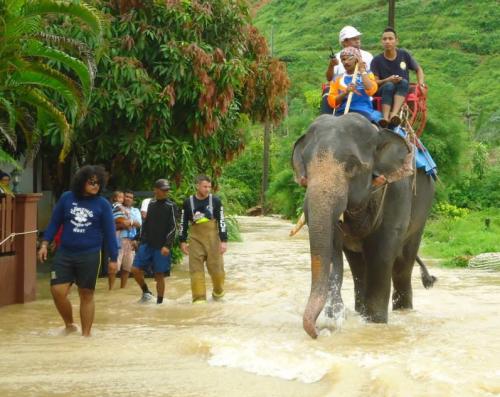 PHUKET: A rescue party of four elephants was dispatched to safely recover 16 tourists stranded in the jungle north of Phuket yesterday after a landslide brought on by torrential rains cut off their return path and the elephants they were riding balked at taking another route.

The tourists were on an elephant trek in the hills behind Baan Thung Kamin in Khuk Khak, an area just north of the popular beach resort town of Khao Lak.

“Their mahouts tried taking another route back to the camp, but it meant crossing a canal that was flowing very strongly because of the downpour,” Khuk Khak Deputy Mayor Sirithorn Buakaew told the Phuket Gazette.

“The elephants they were riding are relatively young and were afraid of crossing the strong current. So we called in rescue workers from several stations to head into the hills on four older elephants to rescue them,” he said.

All 16 tourists were safely recovered, while the mahouts spent the night in the jungle with the younger elephants waiting for the current to subside so they could return home.

The Thai Meteorological Department weather-monitoring station at nearby Takuapa town recorded 64mm of rainfall soaking the area between 10am and 1pm yesterday.

Phuket also endured torrential downpours yesterday and overnight, with the TMD reporting 154mm of rain falling at Phuket international Airport in the 24 hours preceding 7am today.

“Tourists, please be warned not to swim in the sea or play in the water at waterfalls during this period of time. The heavy rain is making them dangerous,” he said.