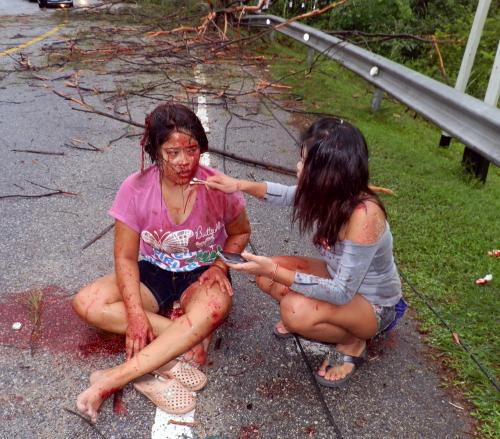 PHUKET: Two women were injured when a pine tree toppled by high winds landed on them as they were riding a motorbike on the Phuket west coast road between Kamala and Cherng Talay yesterday.

Police responding to the call at 5:45pm found Mayavee Rattakosin, 27, and Pranee Kreewan, 34 on the road with head injuries just before the Novotel Hotel entrance.

“We had just finished running an errand in Cherng Talay and were on our way home,” Ms Mayavee said.

“The rain had stopped, but it was windy on the way back to Kamala. The pine tree fell on the cables and hit us. We both fell off the motorbike,” she said.

The women were treated for head injuries by Kusoldharm Foundation rescue workers before being transferred to Patong Hospital, said Lt Col Wanlop Pitakthorn of the Kamala Police.

Both women were discharged from the hospital yesterday after receiving treatment for their injuries.