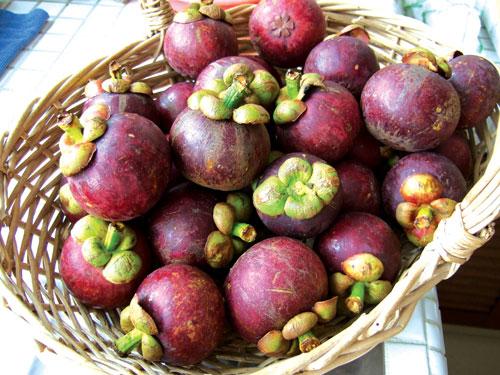 PHUKET: As any journalist worth his salt will tell you, it is always easier to amplify or pad out a piece than to abridge it. Unless you are very careful, condensing a piece can result in a lack of clarity, in stylistic obfuscation or worse, some painful wrenching of the sense. When, in response to a reader’s question last week, I selected ten or so fruit trees he might usefully plant in his garden, I dealt only with half of them in my allotted space. Fortunately, I can finish the job this week. No harm done. No editing required.

We ended with some remarks about citrus trees, but the pomelo (or shaddock) got short shrift. A pity, because it is delicious. In appearance and taste, it’s like a massive grapefruit, it is the largest member of the citrus family, has a thick rind, a tough inner membrane and consequently, is often sold already prepared and divided into sections. Refreshingly acidulated, it lacks the acerbic edge that characterizes the grapefruit. Its evergreen foliage is typically citrus-like, glossy and strong, but the tree itself is relatively modest in size – somewhere between five and eight meters tall and with a neat rounded crown. Pomelos are usually grafted, but can be grown from new seed.

If pomelos are a feature of most fresh markets, so too are rambutans, longans and mangosteens. Currently it is the season for the soft-spined, red rambutan (it means hairy in Malay) or nephelium. A heavy-cropping species, great mounds of the things appear at this time of year in the back of parked pick-ups or on market stalls. Another sound choice for your garden, the rambutan has neat ever- green foliage, white flowers, and a nice form which makes a splendid landscape tree. And best of all – a fruit with tasty, sweet, translucent pulp around a single stone.

The longan fruit is similar in size and shape and likewise sports a taste of the tropics – exotic sweet flesh, inside a bark-thin, smooth yellow shell. Like the rambutan it is a heavy cropper and grape-like bunches are sold in season. Conceivably it is a better garden choice, since it rarely exceeds six meters. It likes a free-draining, sandy soil.

Another seasonally cropping tree, the mangosteen,(botanical name garcinia) is less common in Phuket, but its larger fruit shares some characteristics with the longan and rambutan, namely a globular shape and sweet but tangy white flesh encased in a thick shell. In appearance it somewhat resembles a deep purple tomato. Personally, I would be concerned that the tree might outgrow a modest garden.

So too the avocado (persea). The specimen in my patch, a substantial evergreen presence, is already three storeys high, but has yet to produce those creamy, pear-shaped delicacies. But it clearly enjoys the island’s climate and soil. Commercially valuable, it is surprising that this Mexican native, introduced quite late to Southeast Asia, is so rarely cultivated here. There are numerous cultivars, of which the purplish, egg-shaped Hass is considered the most tasty.

Last but not least the guava, another Mexican resident. I remember drinking the juice but never saw a fruit in the flesh until I came to Thailand. It is widely cultivated here, both as a dessert offering and for its slightly tart juice. The most common form, the apple guava, looks like a knobbly-skinned green apple (some varieties are red or yellow) and can be eaten as such. To my taste buds, the flesh has the faint aroma of pears. Hardier than most tropical fruit trees, the guava has smooth grey bark and a dense branching canopy. It may need pruning, but is unlikely to reach more than seven meters in height.

All these trees have three things in common. On the downside, they will all need water during the fruiting season. But they all bear delicious fruit and perhaps best of all, they can all be grown from new seed.

Tip of the week – Check your shrubs out

A reader is embarking on a major horticultural project for which he has two quotes of between 1.5 and 2 million baht. A substantial outlay.

My advice to him has been to experiment with several possible shrubs and small trees (the project is for 700 meters of tough, decorative hedge capable of being pruned) before committing cash. So we have agreed that the best formula is to plant rows of what we hope are the most appropriate evergreen plants at the actual site and see which ones do best in conditions which will match those for the major enterprise.

So there will be three rows; one each of duranta repens (pigeon berry), syzygium or neugenia known here as cristina (a member of the myrtle family) and ehretia, known in Thai as “sai”.

After three months, we should have a better idea of which species will make the grade.

Hurry up to register for Turtle Fun Run