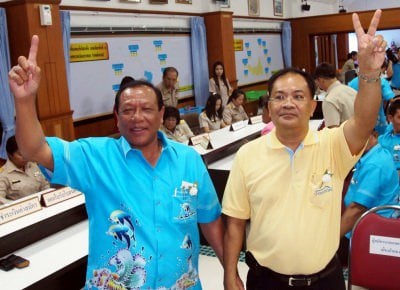 PHUKET: All alcohol sales in Patong are banned tonight and tomorrow due to the elections for Patong Mayor and the municipal council being held in Phuket’s busiest tourism town.

In accordance with the Election Act, the alcohol ban will be in effect from 6pm tonight through to midnight tomorrow night.

“Anyone who breaks the law will face a fine of up to 10,000 baht and six months’ imprisonment.

“The ban will not extend to hotel restaurants, considered to be a special case,” he added.

Incumbent Patong Mayor Pian Keesin, 68, was born in Patong. He began his political career before 1994 as Phu Yai Baan (village head) of Village 3 in what has since become Phuket’s leading resort town.

Mayor Pian became Patong’s first elected mayor in 1995 after the town was upgraded from “Sanitary Division” to municipality status the year before.

He was ousted by a council “budget blockade” led by Surasak Maneesri in November 2003. However, Mayor Pian was re-elected to office in January 2004 after Provincial Court judges found that his rivals had “cheated” in the preceding election by “importing” voters.

Mayor Pian has served as Patong’s top official since and is now looking for his fifth term in office.

However, this time also running for the position of Patong Mayor is Kittisan Kuru of the Patong Gao Na (Patong Progress) party, who served on the town council back in 2003.

Entertainment venue operators in Patong have estimated that the double-shot of weekend alcohol bans will cost local businesses 5 million baht a night.

In light of the economic impact the alcohol bans have on local businesses and Phuket’s heavy dependence on tourism, the latest Phuket Gazette poll asks readers whether all or part of the island should be exempted from the ban. To have your say click here.