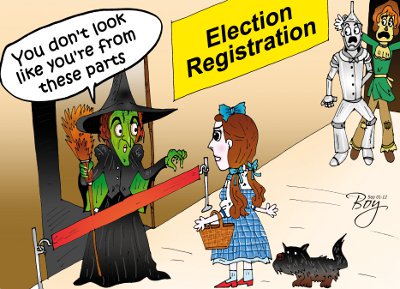 PHUKET: The low turnout for the Phuket Provincial Administration Organization (PPAO) council election last weekend highlighted yet again the problems the island faces due to the fact that so many migrant workers who live here continue to maintain house registrations in their “home” provinces, in some cases despite having lived and worked on the island for over a decade.

The Patong elections being held this weekend are likely to throw this same issue into sharp relief.

According to official figures, turnout for the August 26 poll was 41.8% of just over 234,000 eligible voters. This means that fewer than 100,000 of those eligible were sufficiently motivated to make it to the polls to vote for the person who would represent their interests in the PPAO. As a point of reference, the figure is probably on par with the number of illegal workers from Myanmar living on the island.

The source of apathy among voters is somewhat hard to fathom, apart from the fact that the almost complete lack of policy debate among the candidates left many voters in the dark as to what differentiated would-be representatives, apart from a number.

The small percentage of island residents who enjoy voting rights should be more than happy to exercise them; the PPAO not only enjoys an annual budget close to one billion baht, but also a level of autonomy over how it is spent that is the envy of the bureaucrats at the Phuket Provincial Office. To get some grasp of the numbers involved, the budget works out to over 9,000 baht for each voter who took part in the balloting last weekend.

Efforts to produce a reliable count of how many people actually live in Phuket continue to stymie officialdom. Preliminary figures produced by the national census conducted in 2010 showed 525,018 people living in Phuket: 409,137 Thai (77.9%) and 115,881 foreigners (21.1%), but despite efforts to include foreign residents for the first time this figure is almost certainly on the low side.

Former governor Wichai Phraisa-ngop said during his tenure that the island probably had an actual population of more than a million people during high season.

Whatever the actual figure, there is little dispute that the number of Thai migrant workers living in Phuket long-term probably numbers around 200,000. That they fail to appear on local registrations costs the island millions in budget allocations annually.

Perhaps one strategy to redress the imbalance might be incorporated into the new initiative to legally register the many black plate taxis operating on the island. The drivers often complain that “as local people” they have the right to make a living.

Perhaps the drivers should be required to submit a copy of their local house registration as a part of the application process. Such a move might be a small step forward in getting the island’s true minority, born-and-bred Phuket natives, to have more actual say over what is happening on their island.