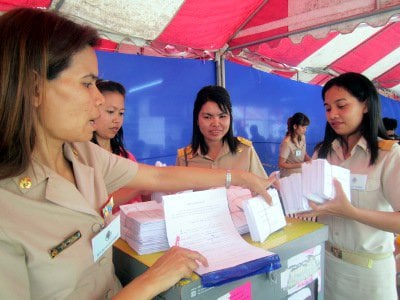 PHUKET: Despite more than 40,000 people taking the time to pre-register to cast “absentee ballots” for the July 3 election, only half that number actually turned up at polling stations in Phuket yesterday.

“A total of 20,874 people cast ‘absentee votes’, which is 51% of the 40,630 people who registered to do so,” said Phuket Election Commission Director Kitipong Thiengkunakrit.

Despite this, the number of people who turned up at Phuket Community Hall to vote for candidates in their home provinces was still more than enough to cause traffic problems on Narisorn Road in Phuket Town, which is usually peaceful and quiet on a Sunday.

Nearby, at Phuket City Hall, voter turnout for early voting for local candidates was proportionately much higher. Of the 1,008 people who registered to vote early for candidates contesting Phuket 1 constituency, 834 (93.6%) turned up to vote.

Meanwhile at Phranangsang School in Thalang, of the 669 people who registered to vote early in the polls for Phuket 2 constituency, 642 (95.96%) voters cast ballots.

Of the tens of thousands of registered voters, only one man who claimed to have registered was not on the list, he said.

Another issue causing confusion among absentee voters was the new constituency boundaries, leaving some voters unaware of which constituency they were supposed to vote in.

“After checking we found their names on the the lists and they were able to vote,” Mr Kitipong said.

“There was a little misunderstanding when we first started. Officers were supposed to give one envelope to each person. Each envelope was to contain the party list ballot and the correct ballot for that person.

“We recorded the incident so the proper authorities will know what happened,” he added.

“After the voting closed at 3pm, we opened the ballot boxes and sorted the envelopes. Each envelope is pre-marked with the correct address so it can be sent to the correct polling station.

“Each voter had to sign across the seal of their respective ballot envelope and each signature was sealed with adhesive tape to ensure no votes are tampered with before being opened on election day,” he explained.

Boonlue Perngrat, Postmaster at Phuket Provincial Post Office, told the Gazette, “All the envelopes were loaded onto a single truck and sent to Nakhon Sri Thammarat by Thailand Post officers and three police officers.”

From there, the envelopes will be sent to the correct polling stations so they can be opened and counted on July 3, he added.