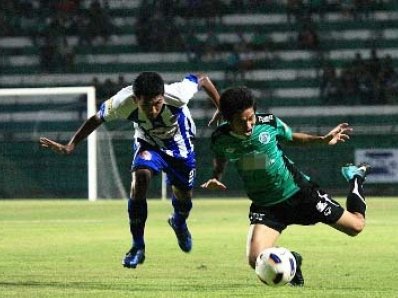 PHUKET: Saturday’s “southern derby” at Surakul Stadium lived up to expectations for an exciting match, but failed to produce any goals for FC Phuket and regional rivals Songkhla FC.

The game was originally scheduled for March, and with the fixture filled Phuket and Songkhla are now up to date for league games played.

Each of the 18 teams in League Division One have played 17 of the 34 allotted matches.
News of Phuket signing French goalkeeper Jonathan Matijas, the imminent return of Diarra Ali and the club being in talks with another French player may have been the catalyst for the home side’s urgent first-half play.

Phuket were certainly the stronger team during the opening 45 minutes, but were unable to capitalize on several opportunities.

Watcharapong Jun-ngam missed a great chance to put Phuket ahead early in the second half. His efforts only stirring Songkhla to life.

Likewise, Voravet Januthai’s 30-yard free kick in the 55th minute nearly found the target, but the ball instead rebounded off the post into space.

Phuket goalkeeper Leuchar Juntawong, aware that his hold on the number one jersey is in jeopardy, made several nervous saves, but managed a second clean sheet in as many games.

Songkhla remain in fourth place and know that dropping two points away against Phuket has put a small dent in their promotion hopes.

“I have to admit that FC Phuket is a good team, but our boys lost focus in the first half of the match. They recovered in the second half and I am satisfied with this draw,” said Songkhla Coach Worawut Srimaka.

The Southern Sea Kirin now need to bring these two facets together when they face current league joint leaders Big Bang Chulalongkorn University (BBCU) in round two of the Toyota League Cup.

On Wednesday night both teams will hope to keep their Toyota cup dreams alive, squaring up at Surakul Stadium for the second time this year.

Their previous encounter on March 13 ended in a goalless draw which saw BBCU alone in pole position, while Phuket were beginning their climb up the table in sixth place.

BBCU is coached by Thai football icon Kitiasak “Zico” Senamuang. He has been capped 130 times for Thailand and scored 63 international goals.

Aussie tourist jumps to his death in Phuket