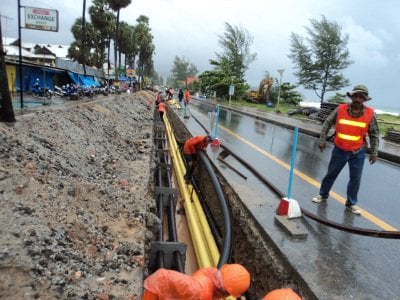 PHUKET: The power cables along the Karon beachfront, on Phuket’s tourist-popular west coast, have been finally buried, but the road still needs resurfacing.

“We are now seeking tenders for a construction company to pave the road,” Norasak Phuriphattaraphan, an engineer at Kata-Karon Municipality’s Public Works Division, told the Phuket Gazette today.

“We expect to have selected a company to carry out the work and for the road to be finished before December,” he added.

“Most of the victims are foreigners on motorbikes who are not used to the road,” said one female local taxi driver.

The dangerous strip, about two meters wide, stretches more than three kilometers along the beachfront.

“We receive complaints every day from both local residents and the hotels as they don’t know what is going on,” Karon Mayor Tawee Tongcham told the Gazette.

“The project installed all telecommunication and power cables underground, but it involved many different organizations, such as TT&T, TOT, CAT and cable TV companies.

“These companies did not have the budgets for their parts of the project available at the same time,” he said.

Each time one of the companies finally had the budget available, municipal workers had to dig the road up again to install that company’s cables, he explained

“After all the wires have underground, they will be tested for a while to make sure they are working well before the road is paved,” said Mayor Thawee.

“Actually, each time after we install cables we resurface the road with gravel, but each time it rains the road surface is damaged again,” he said.

The entire project to bury the cables along the three kilometers from Karon Circle to Kata is budgeted at nine million baht.

Work began in December and was completed on schedule this month, said Mayor Thawee.

As for the near-daily accidents along the road, he said, “The accidents mainly happen because people drive too fast. People should slow down when driving along that road.”