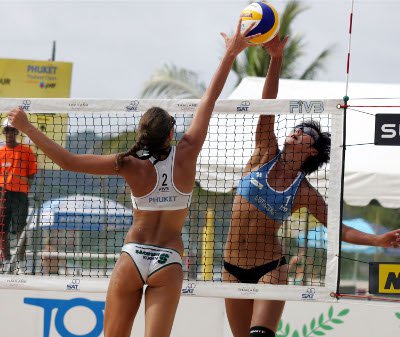 This is the sixth time in Thailand has hosted the women’s season-ending US$190,000 FIVB Beach Volleyball Swatch World Tour Phuket Thailand Open powered by PTT at Karon Beach.

Filling the final eight main draw spots are two teams each from China and Japan along with one team each from Italy, Finland, Latvia and Netherlands.

China’s two teams who today qualified for the women’s main draw are Huang/Yue and Ma/Zhang.

Playing in their first tournament together, Ma/Zhang defeated two Canadian teams to advance to the main draw.

Ma, 21, and Zhang, just 15 years old, consolidated that first win with an impressive victory over the veteran Canadian team of Marie-Andree Lessard/Annie Martin in two sets, 23-21, 21-16 taking just 40 minutes to do so.

“We were so nervous when we first started playing today it was very hard to work together,” said Zhang.

Another surprise package is Italy’s 14th-seeded Laura Giombini/Viktoria Orsi Toth, who advanced with a brace of wins over teams from Canada and Georgia.

The Italians are the lowest-seeded team to qualify for the main draw.

As host nation,Thailand’s three teams have all been seeded into the main draw.

The Phuket Gazette is a charter sponsor of the 2011 Swatch World Tour Phuket, Thailand Open powered by PTT.