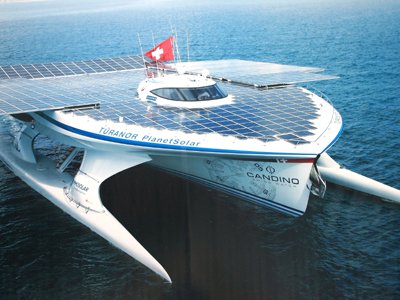 PHUKET: The MS Turanor PlanetSolar, the first solar-powered boat to attempt a circumnavigation of the globe, arrived at Phuket’s Ao Po Marina, en route to the Indian Ocean and the final legs of its 57,000-kilometer expedition.

The voyage began on September 27, 2010 in Monaco and has been mapped with stopovers along the equator, where the boat can exploit the maximum amount of sunlight as it rounds the Earth.

The four-man crew have crossed the Atlantic Ocean, navigated the Panama Canal and sailed the Pacific Ocean, and are now heading for the Suez Canal on their way to the Mediterranean to complete their historic journey.

The MS Turanor multihull is topped by a massive array of photovoltaic solar panels that when fully deployed cover an area of 537 square meters.

At 31 meters long, 15m wide and 6.1m high, and weighing in at 95 tons, it is the biggest solar boat ever built, taking 14 months to construct at the Knierim Yacht Club in Kiel, Germany.

The project began in 2004 with the idea of promoting and investigating sustainable energy sources through future technologies.

Raphael Domjan, from Switzerland, is the driving force behind the project, and expedition leader of PlanetSolar.

“The circumnavigation of the boat is to demonstrate the functionality and efficiency of today’s technology. I think that the project is excellent to get into the heart of cities, to get close to people, to convince politicians and industrialists and let them experience solar energy,” he explained.

On its round-the-globe expedition, the MS Turanor will pioneer the use of sustainable energy technology over long distances on water. It is thus quite different from anything that has happened in the field of mobility to date.

“This solar catamaran uses the very latest technology available on the market. Our intention is to demonstrate that high-performance solar mobility can be realized today by making innovative use of existing materials and technology,” Mr Domjan said.

On Tuesday, the boat and crew were visited by a delegation from the Swiss Embassy in Thailand, including the Swiss Ambassador, Christine Schraner Burgener, who addressed the crew, dignitaries and the media in attendance.

“What we are witnessing here today is one of the great adventures of our time.
“One might think we were at the beginning of the 20th century with the Wright brothers and Charles Lindbergh, and I would like to extend our congratulations to the PlanetSolar team.

“Preservation of the [world’s] natural environment is one of the main priorities of Switzerland’s foreign policy. Our government, universities and private companies work hand-in-hand to safeguard our planet and make it liveable for future generations.

“This innovative project sets completely new standards for future technologies. Thanks to the crew, sponsors and partners for bringing the Turanor to Phuket,” the Ambassador said.

For more information and to keep tabs on the the circumnavigation’s progress on the way back to the Med, visit planetsolar.org