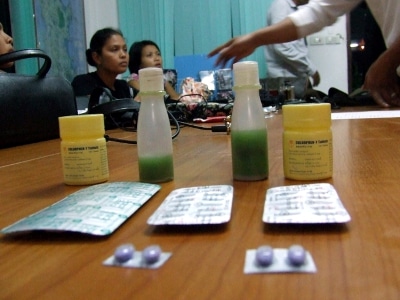 The women all worked in bars on Patong’s famed Soi Bangla, Phuket’s main center for tourists enjoying the local nightlife.

Investigating a string of complaints from tourists who were robbed, officers from Patong Police arrested Ms Kemporn, Ms Saeng and Ms Wanida at their rented room at the Baan Burarak residential estate on Phisit Gorani Road in Kathu, said Maj Thammasak Boonsong.

After questioning the three women, the officers moved on and arrested Ms Supaporn, Ms Sukanya and Ms Suchada, he added.

“They went back to foreigners’ rooms and asked the foreigners to have a drink. They then slipped a concoction of drugs into the victim’s drink to knock them out.

“When their victims were unconscious, they robbed them,” said Maj Thammasak.

Ms Kemporn, Ms Saeng and Ms Wanida all confessed they had drugged and robbed tourists many times, most recently on Friday at about 5am, said Maj Thammasak.

“They found a Singaporean man in Soi Bangla and asked him to stay at the Patong Resort Hotel. When he wasn’t looking, they drugged his beer and robbed him,” he said.

Ms Kemporn explained to the police that the concoction used was a mix of five Alprazolam pills, seven Atarax pills and five Chlorphen-Y pills.

The pills were crushed and mixed with water, which they kept in small plastic bottles to carry with them so they could pour into their victims’ drinks.

All six women were charged with illegal possession of prescription drugs.

Polices seized as evidence a variety of the drugs used as well as many valuables police believe were stolen from their victims,including cash, gold necklaces, wallets, cameras and mobile phones.