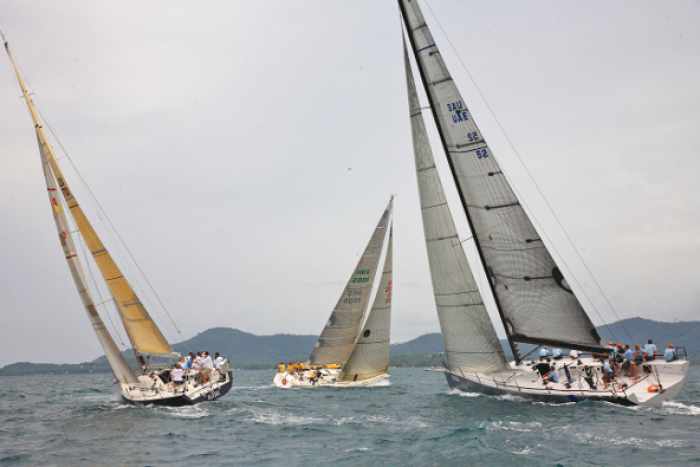 PHUKET: Due to a flurry of late bookings, the organizers of the Cape Panwa Hotel Phuket Raceweek have extended the early-bird discount deadline to allow more crews to take advantage of the reduced price.

Raceweek organizers are predicting a large and competitive field this year, with many local, regional and some chartered entries from afar having already registered, booked their accommodation, and said they are ready to get racing.

In the IRC fleet, a number of top boats will be making their Raceweek debut this year, including the recently crowned 2013/14 Asian Yachting Grand Prix (AYGP) Yacht and Skipper of the Year, Foxy Lady VI lead by Bill Bremner. In addition to their season-winning performance at the Samui Regatta last month, the Foxy Lady VI crew is unbeaten in seven Asian regattas and is looking to test themselves in Phuket’s summer season and get their 2014/15 AYGP campaign off to a flying start.

Also new to Raceweek this year is the Australian boat Jessandra II. Their first Asian regatta was in Samui and after a slow start and a start-line mishap, they put in a great final few days to storm to third place overall – a solid start to their Asian campaign. They will be up against another newcomer and well known sailor on the Asian circuit, Hong Kong-based Paul Winkelmann, who is bringing his HH42 Island Fling to line-up against the growing fleet of 40-footers this year.

Others in the IRC fleet include the well-campaigned Fujin, Venture, Skandia Endeavour of Whitby and Phoenix, to name just a few.

Multihulls out in force

The growth of multihull sailing is evident worldwide, and here in Asia that trend is well established. In Phuket specifically, there is a resurgence in multihull sailing and with the region’s only mutihull-only regatta – Multihull Solutions Regatta – taking place in Phuket the week before Raceweek, the local multihull scene is thriving.

Twin Sharks, Moto Inzi and Voodoo are joined by long-time Raceweek competitor Neil Ayres on the chartered Mamba in the Firefly 850 division. With three past-winners taking part, it looks set to be tough for the Firefly bragging rights.

In Multihull Racing, Nina, Java and Sweet Chariot are up against Raceweek first-timer Galeforce skippered by Kirill Stashevsky. Mixing it up will be the racing trimaran Adrenalin, skippered by Mark Horwood. A boat of racing pedigree from her days in Europe previously, a syndicate have brought her out to Thailand and is looking to cause ripples on the Asian circuit.

3itch – an all-out racing trimaran – is on its way up from Malaysia to Phuket, and following the Multihull Solutions Regatta will be lining up at Raceweek looking to create an upset amongst the growing multihull fleet.