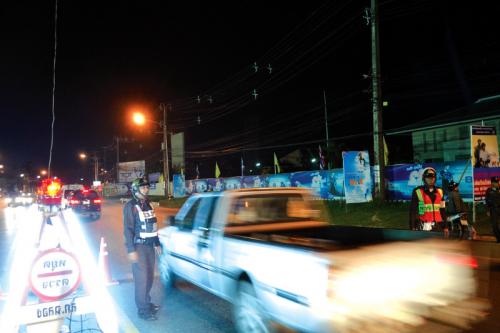 PHUKET: The nationwide Songkran Seven Days of Danger road-safety campaign was deemed to be a raging success on Phuket, with only one fatality on the island’s roads during that period. The strong police presence and abundance of police checkpoints definitely made a difference.

But the checkpoints have vanished along with the police. Is that their work for the year done? Do they no longer care about road safety? Sadly, it does look that way. Issued with a directive to do a certain job for a certain period of time, they do it. But what now?

Now they have no directive and Phuket goes back to sporadic checkpoints and road safety will no longer be the main issue. The death toll on the roads will rise to its normal level and people will carry on, safe in the knowledge that for seven days of the year, Phuket’s roads were nearly death-free.

It doesn’t have to be this way. Police clearly have the manpower to set up manned checkpoints, and there should be more on Phuket. The police should kick on from this successful week and continue the road-safety campaign. Don’t stop because the rest of the country has.

Phuket’s roads are extremely dangerous and over the Songkran period the men in brown made the roads safer. The police presence made people think twice about drunk driving, driving dangerously and riding a bike with no helmet – all things that people should do to begin with, but were actually made to do for seven days.

Road safety is not just down to the police.

Parents, schools, businesses, friends and the Phuket community as a whole need to get behind it. Helmet campaigns have worked to a degree but there needs to be more emphasis on all aspects of road safety for all ages in all areas of Phuket.

Emphasis on road safety should not be limited to a couple of weeks a year. It’s a life-saving education that needs to be passed on year round and once one generation has it ingrained in their heads it can be passed on a lot easier.

It’s a wonderful thing that the road-safety campaign was a success but it’s extremely disappointing that road users will have to wait until the end of December for the next ‘Seven Days of Danger’ to feel that little bit safer on the roads.

Phuket Opinion: Tourist Court, another pie in the sky