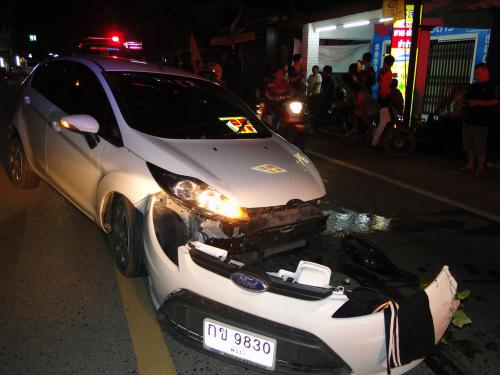 PHUKET: A driver escaped serious injury after he overshot a curve on Phuket’s Baan Don-Thalang road and slammed into a roadside power pole on Monday night.

The vehicle, a Ford Fiesta with Phang Nga license plates, was seriously damaged, but the driver and bystanders escaped injury.

“We arrived at the scene with Kusoldham rescue workers to find a the car blocking the road,” said Maj Kittiphum Tinthalang of the Thalang Police.

“The car was seriously damaged, with the front bumper and left front wheel detached, and oil leaking onto the road. The driver, Supasit Pokkabutr, 31, was standing by the side of the road,” he added.

Mr Supasit told the police, “I was driving from Cherng Talay, and when I arrived at the hairpin bend, I lost control of the vehicle.”

Maj Kittiphum stated, “Mr Supasit was charged with reckless driving. However, he was not drunk.”

Three security men slain in hail of bullets in Krabi