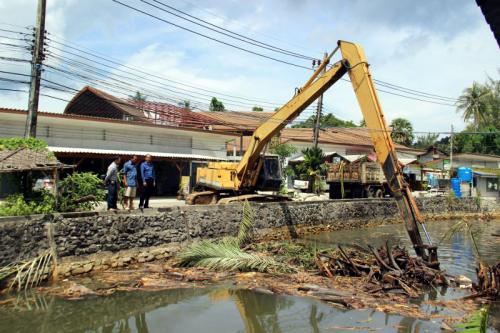 PHUKET: Bang Tao Canal water, which was blamed for a rash of health problems for Phuket tourists and boatmen, is now flowing more freely with 80 per cent of the canal-dredging process complete.

Akkarawat Hirunphun, director of the Phuket-based Regional Environmental Office 15, said tests conducted by his officers in April confirmed that the water in the canal at multiple locations had average Biological Oxygen Demand (BOD) readings well over the legal standard (story here).

Now, however, the water has cleared up to some extent, Cherngtalay OrBorTor President Ma-ann Samran said at a meeting about the issue yesterday.

“When the process is 100 per cent complete, the water will be even more clear, which will allow us to know exactly which buildings are polluting the water based on their discharge,” Mr Ma-ann said.

The pollution of the water has been blamed on the many hotels, restaurants, bars, car wash businesses and houses along a two kilometers stretch of the canal before it releases water out onto Bang Tao Beach.

He announced that another meeting would be held to teach locals the damaging effects of releasing untreated waste water into the canal.

“If local government officers enforce the environmental laws, the residents will see that we are serious about solving this problem,” V/Gov Somkiet said. “I’m pretty sure they will not pollute if law enforcement is strict.”

The date for the next meeting has yet to be set.