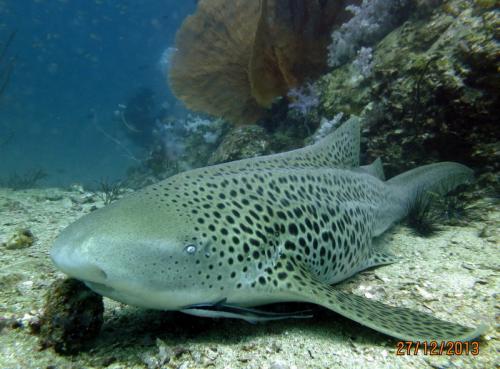 “We had just spent five or six minutes watching a leopard shark swimming around us, and then, as we came around the corner, we saw a blanket of net covering a large amount of Pinnacle One,” said a Phuket diver asked to be identified only as Instructor Vinnie. “It was an awful scene.”

Dive masters and instructors in the area began cutting entangled fish free. Another team slowly worked on pulling the net away from the corals.

“Most of the fish were alive. There were a few dead ones,” Vinnie said.

“I thought I was going to see a dead leopard shark in there.”

Twenty to thirty reef fish were cut free. Many more, trapped in the middle of the tangled netting, were also saved.

The drift net, measuring an estimated 25 meters by 20 meters, was finally removed from the water.

“At the surface, you could see the boat boys pulling sea cucumbers and other bits out of the net,” said Vinnie.

This morning, a member of marine conservation group Go Eco Phuket brought the incident to the attention of Department of Marine and Coastal Resources (DMCR) Region 5 Chief Tanet Munnoy.

“We have a mission planned tomorrow to drop artificial reef blocks in Koh Mai Thon and Koh Racha. If we have time, we will go to Shark Point. If not, our staff will inspect the area on Saturday,” Mr Tanet said.

This is not the first time large fishing nets have been snagged in the marine conservation area. In July, a Sea Bees staff member captured video footage of an enormous fishing net at the site. Go Eco Phuket quickly scrambled divers and two dive boats to remove it (video story here).

Mr Tanet reiterated that though fishing in the area is illegal, it is difficult for his officers to make arrests, despite having bolstered patrols starting in August last year (story here).

“When fishermen see our patrol boats while fishing in restricted areas, they release any fish they have already caught. We must catch them in the act of fishing illegally in order to make an arrest,” Mr Tanet said.

“However, we recently had a meeting concerning this issue. We are developing several methods for apprehending illegal fisherman.”

Those caught illegally fishing can face penalties of up to a year in prison, a fine of up to10,000 baht or both.

“Even though arresting fishermen in the act is not easy, we will continue to do our best to protect the environment,” Mr Tanet said.

Nothing as sweet as incentives for Phuket pineapples