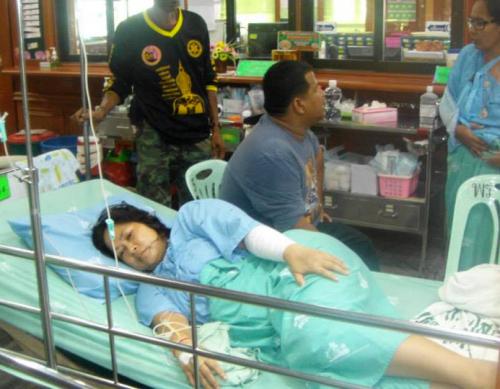 PHUKET: Six of the Phuket protesters injured in a bus crash on Saturday, while en route to anti-government rallies in Bangkok, were transferred to Phuket hospitals last night.

“They were transferred from hospitals in Surat Thani and arrived in Phuket at about 9pm,” protest co-ordinator Amnuay Kumban told the Phuket Gazette.

The two drivers and the remaining 36 passengers were discharged from hospitals in Surat Thani shortly after the accident, Mr Amnuay explained.

“Among them was a 10-year-old boy from Kathu who was on the bus with his parents,” he confirmed.

The protester’s bus departed Phuket at 9:30am on Saturday to join the anti-government rallies in Bangkok, which have taken the capital by storm today (story here).

At about 3pm, the driver lost control of the vehicle in the heavy rain and strong wind. The bus careened off the road, Mr Amnuay said.

“Fortunately, we did not lose anyone in the accident, and this will not stop us from joining the protest in Bangkok. We are doing the right thing. More people are going to Bangkok to join the rally,” he said.