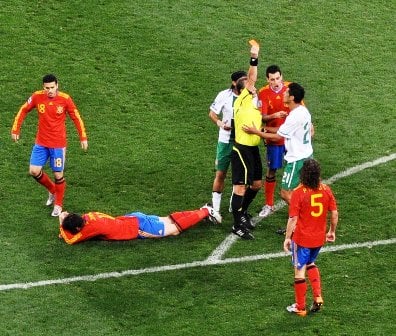 PHUKET: “We have been done in the past – like with Woodgate. We should have surrounded the referee to get him sent off.”

Stephen Hunt, Wolverhampton Wanderers midfielder, suggests his team mates need to follow the example of other sides by ganging up on officials to encourage correct or even harsher decisions.

Hunt was referring to their recent match against Stoke City when Jonathan Woodgate, already on a yellow card, conceded a penalty but was not sent off for a second bookable offence.

Coincidentally, this story comes in time to support the Phuket Gazette‘s Quote of the Day earlier this week when we opined that bad refereeing could be the cause of football’s many unruly elements.

Case in point: the failure to send Woodgate off has empowered a professional player to suggest lowering his team and the game itself in order to effect a decision, even though FA rules ban players from this type of conduct.

If professional players are allowed to get away with these actions, or to boldly state regret for not doing so in the media, what message does that send out to youngsters (who look up to these players) and hooligans who claim to be supporters of the game?

Could Hunt’s comment incite players to mob referees therefore causing bad decisions which in turn could lead to fan unrest?

Players, management and fans must, in the end, accept the referee’s decisions. We don’t have to approve of an official or his abilities, but players and fans do need to abstain from mobbing, physically assaulting or degrading any of them.