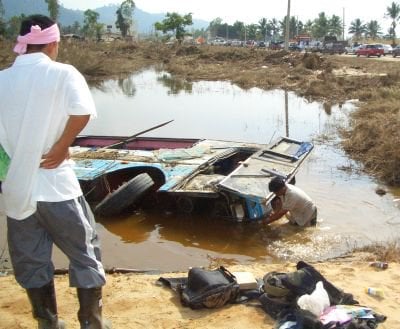 PHANG NGA: Hotels, resorts and other structures along the beach in Khao Lak were devastated by last Sunday’s tsunami waves, which ravaged everything in their path and pushed wreckage back all the way back past Highway 4, the main road through the area.

A fisherwoman, Sawaad, told the Gazette, “I saw the huge wave come over one kilometer onto the land. It was as high as the casuarina trees that line the beach.”

She lost her home and two family members and now has nowhere to live.

The road which, before the tsunami hit, was lined with lush vegetation, now affords an open view of devastation stretching for kilometers.

Khao Lak now more closely resembles a war zone than the beautiful resort area it once was, with military vehicles rushing about filled with blackened and bloated bodies and helicopters chopping through the skies above.

More dead bodies awaiting removal are lined up in rows under a makeshift awning, many with their limbs frozen through rigor mortis in grotesque positions. On several, arms and fingers point skyward as if frozen in a final, terrified plea to God – a plea that went unanswered.

The reek of rotting flesh from unrecovered bodies, mingling with mud and stagnant pools of sea water, permeates all.

One of the many volunteer relief workers – most of whom wear cloth surgical masks in an attempt to block out some of the stench – is Dusit Duangmanee, a teacher at Satree Phang Nga School.

He said local people who survived the disaster were still reeling in shock, with many refusing to come down from hillsides out of fear that more giant waves could hit the shoreline there.

As the area was cut off from traffic and telecommunications were down following the disaster, rumors spread and grew unchecked among the dazed survivors, he added.

Some feared that a weapons armory in the Royal Thai Navy base in Tab Lamu, just south of Khao Lak, was going to explode.

Others attributed the waves to the wrath of Mother Nature, saying the disaster was a form of divine punishment for their disregard for the environment during the area’s headlong rush to develop as a tourist destination in recent years.

Even among the least superstitious, the idea appears to have some eerie resonance; the devastation was so complete in many areas that they appear never to have been built upon at all.

In some places it is difficult to find even a single remaining landmark to determine if one is standing in, say, the Bang Sak or Pakarang Beach area.

K. Dusit said, “There are more than 50 relief units here from all over Thailand, bringing donations of food, water, clothes, and so on.

“But we still need more people to help us to uncover and carry out the dead bodies; more and more are being discovered all the time.

“There is mud and garbage everywhere, so it’s difficult to remove bodies from under the wreckage,” he added.

“I would like the government to help us build new houses, and also to educate us about tsunamis and other kinds of disasters so that we can be more careful in the future,” he said.

‘What happens now will depend on how much money the government is willing to give us to help us rebuild.

In Hawaii, they have a lot of earthquakes, but that has never kept tourists away from there,” he said.

At the District Office in Takuapa, more than 100 people were waiting for administrators to issue death certificates, and already many funerals were being held in local temples.