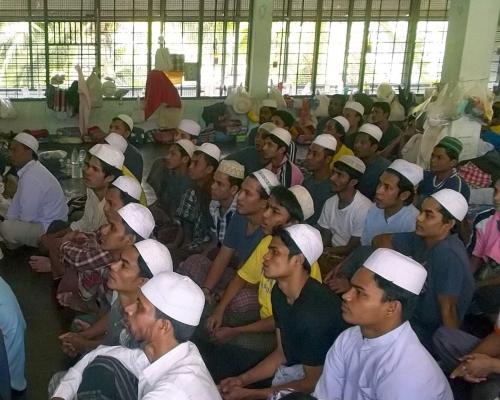 PHUKET: The Minister of Social Development and Human Security declared the detention and trafficking of Rohingya through Thailand to be the subject of clear human rights issues and a national security threat after her visit to the Phang Nga facilities north of Phuket on Saturday.

“After listening to senior officials dealing directly with the refugee influx of Rohingya in Phang Nga, I can clearly see that this is a human rights issue, and concerns national security,” said Minister of Social Development and Human Security Paweena Hongsakul. “The refugees must be well taken care of while they are displaced in Thailand.”

“Later, many of them were transferred to other provinces in order to relieve pressure here [story here]. There are currently 261 refugees under our watch, including 43 people in the Phang Nga shelter,” Lt Col Neti explained.

Despite the transfer of hundreds of Rohingya from the Phang Nga facilities, they are still notoriously overcrowded, leading some refugees to flee the facilities (story here and here).

“The refugees are suffering from overcrowding here. They are crammed into only one space, so we need to provide a new shelter for them,” Ms Paweena said.

“Officials must keep a close eye on the situation, so that none of these refugees slip into the hands of human-trafficking gangs,” she said (story here).

In addition to fending off the efforts of human traffickers, as well as poor morale due to cramped living conditions, immigration officers are struggling to provide for the refugees due to language barriers, said Ms Paweena.

“There is an urgent need for interpreters,” she said.

“We need to talk to several government departments, such as the Office of the National Security Council and the The Ministry of Foreign Affairs. I will present my findings to Prime Minister Yingluck Shinawatra so that all parties can methodically work through this issue to a final solution,” Ms Paweena concluded after her visit.

Belarus woman hospitalized in Phuket after slamming motorbike into tree