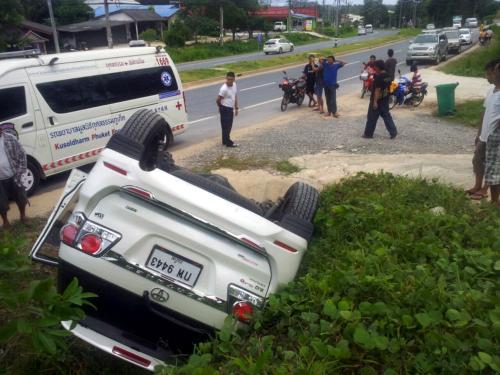 PHUKET: A local resident at Nai Yang Beach, on Phuket’s west coast, yesterday spent 20 minutes waiting for a team of car detailers to perfect the shine on his white Toyota Fortuner – only then to roll the vehicle upside-down into a ditch 10 minutes later.

Concerned villagers called the Kusoldharm Foundation at 10:45am, reporting a car had crashed into a ditch on the airport spur road, joining Thepkrsattri Road in Mai Khao and Phuket International Airport.

“I had just been to a car care place down the road. I was heading home to Nai Yang when I went to turn left onto the main road,” Mr Thawee said.

“My front left wheel went into a ditch. I couldn’t brake in time and my car flipped into it,” he explained.

“I didn’t see the ditch because there’s a lot of high grass covering it,” Mr Thawee added.

Mr Thawee suffered no injuries in the incident.

He called his car insurance company, which dispatched a truck to recover the vehicle.