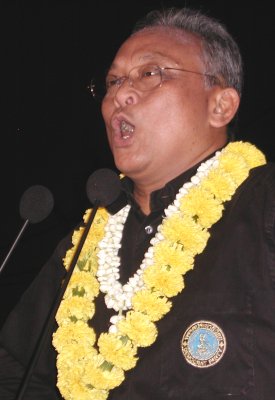 The Democrats held the rally to explain to voters why the party had decided to boycott the snap parliamentary elections, due April 2, and also to explain why they felt it was wrong for PM Thaksin to have dissolved Parliament.

Suthep Tueksuban, Secretary of the Democrat Party, first to speak at the rally, said that PM Thaksin had accused the Democrat Party of being alone in opposing him. But, K. Suthep pointed out, many other factions were against the idea of PM Thaksin remaining in power. The PM was driving the country to ruin, he added.

He said that the Democrats had decided to boycott the election because they did not want to be part of PM Thaksin’s “…plan to cover up for himself and his mistakes”.

“Do not think that because the Democrat Party is not taking part in the election that we are not there for the public. We are still your representatives in the fight against the Thaksin regime and in the struggle to return true democracy to Thailand,” he said.

“If there is still is an election on April 2, I would like to ask Phuket people to put a cross in the last box [in the ballot papers], the one that says, ‘I don’t want to vote for anybody’. And we will see how many Thai people don’t want Thaksin to be Prime Minister anymore,” he said.

Sathit Wongnongtei, a member of the Democrat Party Managing Committee, claimed that PM Thaksin always looked down on Thai people and did not give them credit for being able to think for themselves.

Other speakers were Dr Trirong Suwankeree and Dr Surin Pitsuwan, both deputy leaders of the party. They, too, urged locals to struggle against the Thaksin regime.

Abhisit Vejjajiva, Chairman of the Democrats, did not attend the rally.