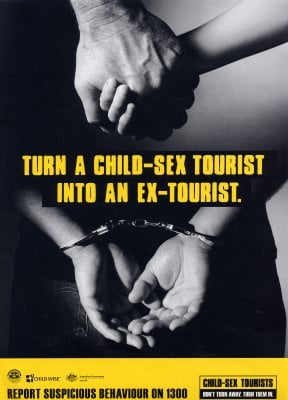 KATA: The leader of a workshop on countering child sex tourism, yesterday called for hotel and tourism industry workers, and even tourists themselves, to report any behavior they suspect might be leading up to child sex abuse.

The workshop, at the Kata Beach Resort, was aimed at teaching those present – 64 government officers, hotel staff, souvenir vendors, tour company and restaurant staff, and karaoke workers – to identify types of behavior that might lead to abuse of children.

It was led by Anita Dodds of the Australian anti-child-abuse organization Child Wise, who explained, “Child Wise recognizes Thailand as a hot-spot challenge area which already has child sex tourism, so training courses are being conducted to prevent this kind of problem.”

The workshop introduced attendees to strong slogans, including “Don’t turn away. Turn them in” and “Turn a child-sex tourist into an ex-tourist.”

The campaign urges people to report suspicious behavior to Tel: 1300, a number being reserved in all Association of Southeast Asian countries as a 24-hour hotline to receive such reports.

“The message is clear,” said Ms Dodds. “If the behavior of other tourists makes you feel uncomfortable, don’t turn away; turn them into the authorities.”

Explaining why the workshop, which has already been staged in Chon Buri and Chiang Mai, was brought to Phuket, Ms Dodds said, “We’re also looking at locations where tourists are growing in great numbers, which could be emerging destinations for child-sex tourism.

“We encourage people to look out for, and report to the police [‘overly affectionate’ behavior towards children] so that [such people] can be properly investigated.”

Urajchata Chaochalakorn, Director of the Office of Tourism Development (OTD), which helped coordinate the workshop, said that the number of reported cases of child trafficking and child sex abuse in Thailand has been decreasing.

Although she had no figures to back up her assertion, she noted, “Most cases have involved foreigners who had been staying in the country for two or three months, or longer.”

However, K. Urajchata also said that children between the ages of eight and 15 were at risk of being drawn into prostitution, especially by what she called “sex tour guides”.

“The government is focusing on [developing] ‘quality tourism’, so we are trying to combat child sex tourism by stopping it before it happens,” she added.

Phuket Tourist Police Inspector Pol Maj Bundit Khaosutham said that his officers had yet to arrest anyone for child sex abuse.

However, he said, “Since October, we have been investigating five foreigners who entered the country on tourist visas, but they have yet to break the law.

“Phuket is certainly a high-risk area for child sex abuse,” he added, noting that sex tourism is receiving greater play in the media these days.

“Uniformed Tourist Police patrols at night have helped to protect children from being groped and have kept child prostitution off the streets,” he asserted.