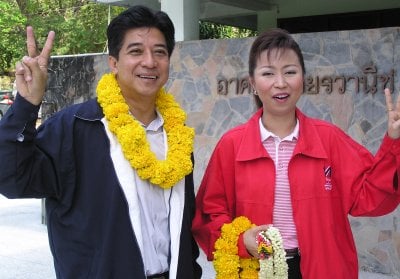 Arriving at 10 am at Phuket Provincial Community Hall were TRT District 1 candidate Dr Sriyada Palimapan and District 2 candidate Wisut Santikul, both of whom were soundly beaten by Democrat Party incumbents in the last general election, in February last year. About 20 supporters were on hand to cheer on the two candidates and offer them flower garlands.

With opposition parties boycotting the poll as part of a bid to drive Prime Minister Thaksin Shinawatra from office, the TRT pair become no-contest favorites in the election, which is being seen more as a national referendum on whether the Thai premier maintains the legitimacy to lead.

Dr Sriyada, who is married to Sarawut “Joke” Shinawatra, said she understood the gravity of the current political situation. By registering, she was following TRT Party policy, she said.

“I accept that the current climate has caused [the TRT] stress, but April 2 will be the day when the people can tell us what they want by how they vote … Although we don’t know how many parties will register candidates, there will be many boxes on the ballot for voters to choose from,” she said.

One of the options alluded to in that comment was the “vote-for-no-one” ballot option. Over the weekend, PM Thaksin vowed to step down if TRT receives fewer votes than the combined total of “vote-for-no-one” selections plus votes cast for the lesser-known political parties that have chosen to take part.

“I don’t want Phuket or the Thai people in general to lose their voice. Voting is not just a right; it is a responsibility under the Thai Constitution,” she said.

“We have already pledged that [if elected] we will amend the Constitution, which will take about a year. If I am given the chance to serve the people here, I will push for the stalled International Convention and Exhibition Center (ICEC) to be built and for a permanent solution to the island’s water supply problems,” she said.

Dr Sriyada added that another focus of the TRT, if they win, would be amendments to the law to make it easier for poor people to be issued Chanote land title deeds. “This is a very big problem in Phuket at the moment,” she said.

TRT District 2 candidate Wisut Santikul – who garnered some 27,000 votes in last year’s election, compared with 43,300 polled by the winner, Democrat Chalermluk Kebsub – said that if given a new mandate by the people the TRT would continue with such programs as its 30-baht health insurance, building community housing for the poor, tackling water supply issues and promoting tourism by restoring direct air links to such locations as Australia and Japan.

“In the long term, we want to study and move forward with the Phuket Bay Development Project,” he said.

As for the Opposition’s decision to boycott the poll he said, “I don’t feel that worried about it. In the past, the other party used to follow parliamentary procedure. In the end, the decision will rest with the people of Phuket. This is political, and PM Thaksin will continue to rally support for his party,” he said.

Regarding his own campaign in the short run-up to the poll, he said, “I won’t have enough time to campaign in every village, but I will do my best. We got 20,000 votes last time and I am quite sure we will get more this time around,” he said.

“Some people are opposed to [TRT], and are protesting against us. But there are still some groups – the silent majority, the grassroots people who have benefited from TRT policies – who will make their voices heard this time around,” said the former Vice-President of the Phuket Provincial Administration Organization.

“I am concerned about the long-term effects on tourism and investment if these [anti-Thaksin] protests continue,” he added.