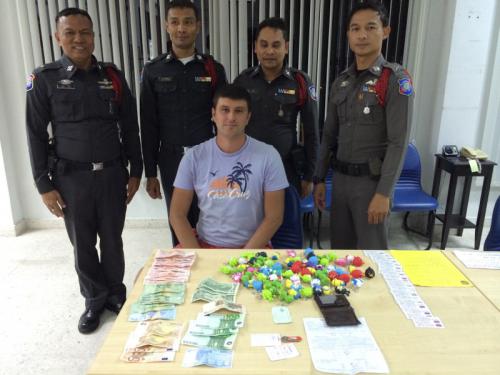 Mykola Chornyi, 30, was dropping cards on restaurant tables that said he was deaf and asked for patrons to either donate money or purchase an Angry Bird key chain for 100 baht, Wichit Police Superintendent Chawalit Phetsipear explained.

“We were notified by a restaurant customer at about 6pm,” said Phuket Tourist Police Inspector Urumporn Koondejsumrit.

“We arrived at the scene, but could not find him. We told restaurant staff to inform us if he came back. Officers waited at the mall in case he did.”

Mr Chornyi returned to the restaurant at about 7pm, when police apprehended him.

“We asked Mr Chornyi for his passport, but he said he had used it to rent a motorbike and did not have it. He only showed us the documents proving that he is deaf,” Maj Urumporn said.

“We contacted the Immigration Police in order to verify his visa information. Mr Chornyi came into the country on a tourist visa which will expire in March,” said Col Chawalit.

“He was fined 1,000 baht for disturbing customers and 2,000 baht for failure to provide his passport as requested,” said Col Chawalit.

Mr Chornyi was released after he paid the fines.