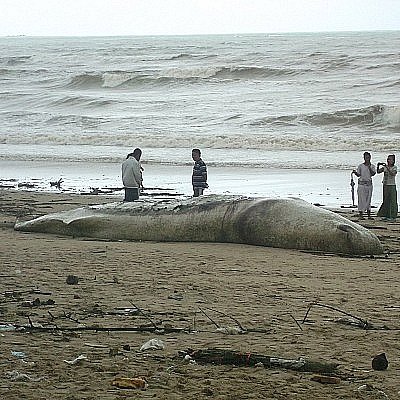 PHUKET: The carcass of a sperm whale measuring nine meters long and weighing an estimated six tons was found washed ashore at Bang Sak Beach in Phang Nga, north of Phuket, this morning.

Experts from the Phuket Marine Biological Center (PMBC) believe the whale died at sea from an illness about four days ago and its carcass was washed ashore by the rough water brought on by the current southwest monsoon.

Not knowing who to call, local villagers who first spotted the dead whale reported the find to local rescue workers at about 8:30am.

The rescue workers arrived to find the whale on the sand in front of the Royal Bangsak Beach Resort. They reported that the whale had no teeth, and an overpowering stench of “rotting fish”.

Dr Kongkiat Kittiwattanawong, who heads the PMBC’s Endangered Species Unit, told the Phuket Gazette that, “Sperm whales live in deep waters; such as off the Similan Islands. They eat squid. The whale probably became sick and died in the ocean and its body was then washed ashore as the sea off Phang Nga is quite rough at this time.”

PMBC officers cut a tissue sample from the carcass in the hope that they will be able to identify the cause of death, he said.