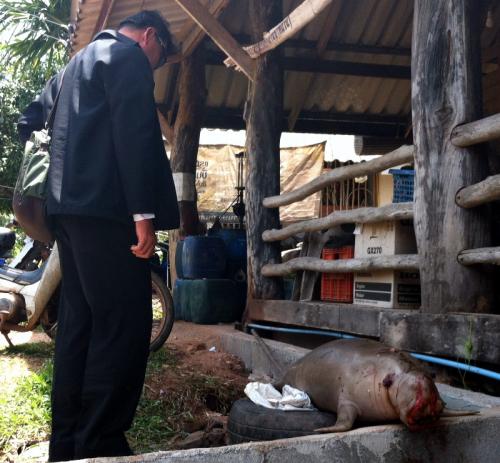 PHUKET: A dead dugong was found floating just off the coast of Koh Pu in Krabi by a local crab fisherman yesterday morning, prompting villagers to take action.

The young marine mammal was discovered with a long gash across its snout in front of the Baan Koh Pu village port and was dragged to shore by villagers before it was reported to the Phuket Marine Biological Center (PMBC).

This is the first report issued to the PMBC by the local residents, who were unaware that it was important and necessary to report such matters, explained the village Kamnan, Samran Raden.

“This is at least the third one we have found dead since October last year,” Mr Samran said.

Before being notified of the possible death of at least two more dugong last year, Dr Kongkiat Kittiwattanawong, who heads the PMBC Endangered Species Unit, had already voiced concern over the dramatic rise in the number of dugong deaths in the Andaman region.

In 2011, only four of the vegetarian mammals were found washed ashore, while 12 were reported in 2012.

“The increase in deaths is a serious issue,” Dr Kongkiat said earlier this year. “It’s the highest number we’ve seen in the past 20 years.”

Dr Kongkiat believes the deaths were caused by fishing equipment and boats, as a number of the animals were found wrapped in nets or had wounds consistent with those inflicted by the propeller blades of fishing boats.

“The deep gash on the body of the 1.12-meter dugong we found today, as well as other injuries to its body, are consistent with injuries sustained from being hit by a boat propeller,” Dr Kongkiat said.

The International Union for Conservation of Nature’s Red List of Threatened Species, the world’s most comprehensive inventory of the global conservation status of biological species, lists the dugong as a “species vulnerable to extinction”.