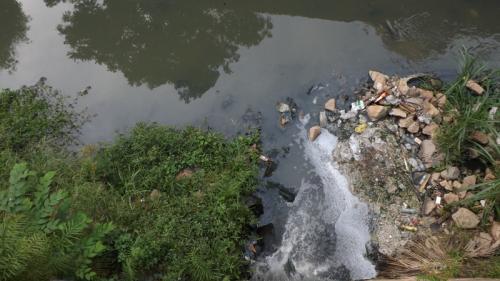 PHUKET: Polluted water with a stench so overpowering it is making people physically ill has become the bane of residents along the banks of the Bang Yai Canal in Phuket Town.

“Dirty water is released into the canal at odd intervals, day or night,” she said. “But each time it happens, the stench gets stronger.”

“Untreated wastewater is being dumped into the sewers in Rassada, just before Samkong, then it travels through the sewage system to the main treatment plant at Saphan Hin, where it is treated before being released into the sea,” said Phuket City Municipality Chief Administrative Officer Thawatchai Thongmang.

“We contacted Rassada Municipality, asking them to stop the release of untreated wastewater into the system, but we have yet to receive any response,” he said.

The water in Bang Yai canal has been tested and some of the results were off the scale.

The average biological oxygen demand (BOD), a key indicator of water quality, measured 54. The BOD standard average is about 34, said Chakkrit Songsaeng, Phuket City Wastewater Treatment Chief, who tested the water in the canal where it flows under Yaowarat Bridge in Samkong (map here).

The suspended solids (SS) average weighed in at 44, nearly double the accepted average of 24 and exactly double the industry standard of 22.

But it was the grease and oil (“G&O”) reading that outstripped all other pollutant readings of the Phuket Town canal.

Bang Yai Canal in Samkong oozed a reading of 19.6. The average is about 0.4, Mr Chakkrit said.

While local residents suspect the culprits are industrial factories upstream, Mr Chakkrit points the finger at the slew of new communities that have sprung up along the canal in Rassada in recent years, namely along Soi Paniang just north of Samkong.

To this, Rassada Municipality Chief Administrative Officer Dechakanee Leelanont said that his community was not to blame.

“I assure you the dirty water in Bang Yai Canal is not us,” he said.

“Also, we have not received any request from Phuket City Municipality asking us to stop releasing untreated wastewater into the canal,” he added.

An officer at Rassada Municipality’s Public Health and Environment Department, speaking anonymously, agreed with Mr Chakkrit, saying that the likely culprit was the hundreds of houses that had been built along Soi Paniang in recent years – many without septic tanks installed.

The officer also verified it was not industrial activities along the canal that were polluting the water.

“Almost all factories in Rassada have installed tanks to treat their wastewater before releasing it into the canal, but there are some communities along Soi Paniang that still have not installed septic tanks. That is affecting the water quality,” the officer said.

Jarun Nongsook, an engineer at the Phuket Provincial Industrial office, agreed. “The dirty water affecting Samkong residents is from raw sewage from the Soi Paniang area being emptied into the canal… It is not from the private factories in the area,” he said.

“The pH average of the water was 6.73 and the G&O average was 4.8, all within the normal parameters,” he said.

“The water the factories release into the canal is clean,” he said.

However, the project is likely to cost upwards of 60 million baht. “We are aware of the problem and we are trying everything we can to solve it. We expect our project to be approved so we can resolve this issue to help local residents,” Mr Chakkrit said.