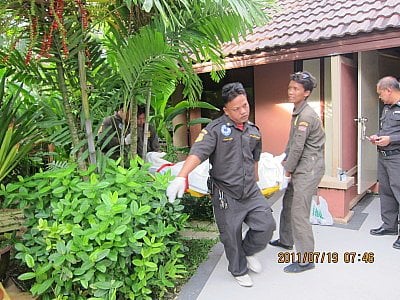 PHUKET: The Danish man found dead at a Phuket hotel last Tuesday likely died as a result of diabetes and heavy drinking and smoking, police said.

The body of 62-year-old Preben Thamsen Schmidt was found in the gardens of the Print Kamala Resort early in the morning. He had wounds to his face and arms and was last seen drinking in front of his hotel room at 1am.

Lt Col Anek Mongkol of Kamala Police told the Phuket Gazette that there would be no medical examination, as Mr Schmidt’s wife is certain he died as a result of a combination of his illness and addictions.

“His wife said she has no doubts about his death being a result of behavior and the diabetes,” Lt Col Anek said.

“Our initial investigation indicates that his death was an accident. He was drunk and fell,” he said.

“We assume that the wounds on his face were caused by rocks or other solid objects when he fell off the [ground floor] walkway. We do not think this case involves violent crime,” he said.

Police had also interviewed a friend of Mr Schmidt, who told them that Mr Schmidt drank and smoked regularly, Lt Col Anek explained.

“He actually sneaked back to Thailand because his wife didn’t allow him to drink and smoke due to his illness,” he added.

Lt Col Anek said the Danish Consulate collected documents from him this morning and that the body will likely be sent back to Denmark today.