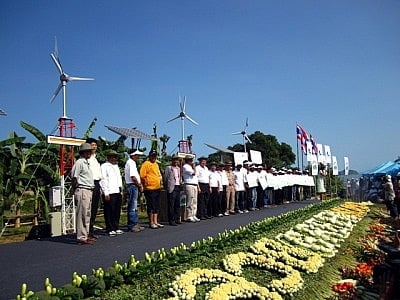 PPEO Chief Jirasak Tummawetch along with representatives from A-Wing Co Ltd, the Thai affiliate of the Japanese small wind turbine manufacturer, made the announcement at a meeting with Phuket Vice Governor Somkiet Sangkhaosutthirak.

A-Wing set up operations in Thailand to lower production costs and better supply the ASEAN region with their products. The planned turbine has a production capacity of 1,000 watts and will be a step toward relieving Koh Lone, located off Phuket’s southwest coast, of its electrical supply issues.

“Each Koh Lone household currently pays about 2,000 baht a month to run their generator, but this only provides them with four hours of electricity per day. They are having trouble,” Mr Jirasak said.

“We are drawing up a plan to request 18 million baht from the Ministry of Energy and a Swedish fund in order to install wind turbines, solar panels and hydroelectricity generators on the island so that residents have access to a continuous supply of electricity,” he added.

“This wind turbine can start generating electricity at wind speeds as low as 1.5 meters per second… I think wind energy can be harnessed to supply power for streetlights and small hotels,” he added.

Arine Thongsthit, business coordinator at A-Wing explained that the company is aiming to bring electricity to areas where there has been no previous supply.

V/Gov Somkiet expressed his support for the project, saying, “In the future, it will be possible for people to use wind turbines to generate their own personal electrical supply, especially those who live in houses on hillsides or residents who live far away from main power supplies.”

Big Buddha Hill was a potential site for the next wind turbine installation, Mr Jirasak said.

“Wind speeds there reach about six meters per second, which is quite strong when used for producing energy. I think we should support the temple with wind turbines because it is still relying on generators,” he said.