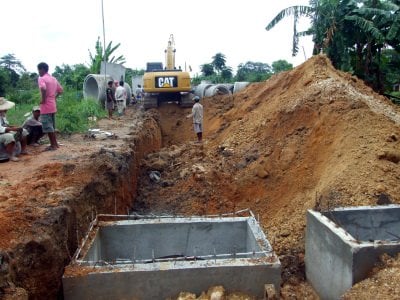 PHUKET: A Burmese migrant worker was buried alive at a Phuket construction site this morning when a large pile of dirt slid into the trench he was working in.

Min Hla Thein, 45, was working on a large drainage system at the Phuket Villa 5 project in Wichit when the landslide filled the 2.5-meter ditch, police said.

Phuket City Police Capt Somchai Nuubun arrived at the scene to find Mr Min’s body placed in front of a backhoe next to the trench. His body did not have any visible injuries, he said.

Other workers were unable to dig through to Mr Min in time and he suffocated. Two of his co-workers had exited the trench only minutes earlier, Capt Somchai said.

Police suspect that recent rains contributed to the landslide, but are also investigating the contractor’s decision to place piles of dirt alongside the trench.