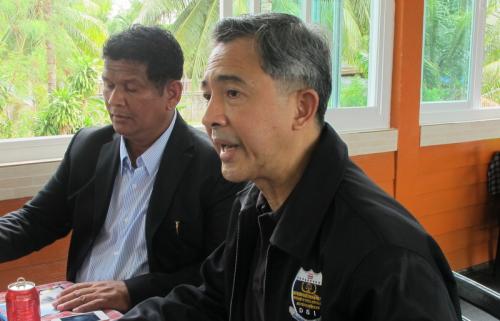 PHUKET: Officers from the Department of Special Investigation (DSI) launched their own inquiry yesterday into Cherng Talay locals’ complaints that foreigners were stealing their jobs.

Lt Col Somboon Sarasit, head of the DSI’s Bureau of Special Crime Unit 3, said that he was in Phuket to investigate Russian-owned businesses with nominee shareholders.

“We will inspect the area and collect information from local vendors who are struggling because of these companies,” he said.

“After that, we will check with the Department of Business Development to see if these companies are being issued work permits or not,” he added.

“Owners of companies that have not been issued work permits for their foreign staff face a maximum penalty of three years imprisonment or a fine of 100,000 to a million baht,” he said.

“If Thai nominee shareholders are involved, they will also be charged,” he added.

Col Somboon, who was accompanied by Cherng Talay OrBorTor President Ma-ann Samran, said that he would start by inspecting Alex Holiday Tour Co, Ltd, the company that voluntary shut its Bang Tao office after taxi drivers protested against it and tore down its sign on January 28 (story here).

“We have called Dan Wanbaworn, who is the Thai nominee shareholder and a member of management team to talk to us tomorrow [February 14],” he said.

The DSI plans to inspect businesses in the Cherng Talay area first, and then move on to Patong, Kata and Karon.

Col Somboon invited locals with information about foreign-owned businesses operating illegally to report them to the Department of Special Investigation at 02-8319 888.

“There are about 400 taxi drivers in the Cherng Talay area and all of them live in Cherng Talay. They use their own cars to do their business – it is a local business in our community.

“We have heard from some tourists that Russian business operators told them not to use services run by local people and it has caused us a great deal of trouble,” Mr Kasem said.

“About 2 years ago, we made enough money to support our families, but after our jobs were stolen, we have been unable to make enough money,” he added.

“I do not understand how Phuket Provincial Employment officers could issue work permits to some foreign business owners when some types of businesses are reserved only for Thais,” he said.