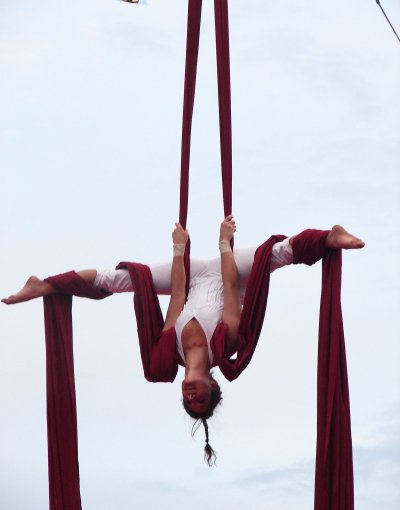 Some of the world’s best street performers have descended on Phuket Town this weekend for the event, which is sponsored by the Tourism Authority of Thailand (TAT).

The festivities, taking place in the old quarter of Phuket Town and running until Sunday, boast a stellar line-up including 23 acts from nine different countries.

There is something for everybody over the weekend, including music, magic, comedy, pantomime, puppetry, stilt walking, trapeze, balloon modeling, clowning, acrobatics, physical theater, unicycle, dancing and juggling.

The shows are being performed on six separate stages along Thalang Road and part of Krabi Road, while other acts are on Thepkrasattri/Phuket Road from the Dibuk Road intersection to Phang Nga Road.

The highlight tonight will be the performance of renowned street artists Seth Bloom and Christina Gelsone, better known as The Acrobuffos, who bill themselves as “laughmakers, street players and knockabout philosophers”.

All of the mentioned performers will also be strutting their stuff on Sunday alongside a host of other acts.

“We chose Phuket to host this festival because it’s a main tourism destination. We would like to send a message to the world that the tourism season has started. And after all the recent storm and flooding in the South, we would like to give local people and tourists a smile and laugh.”