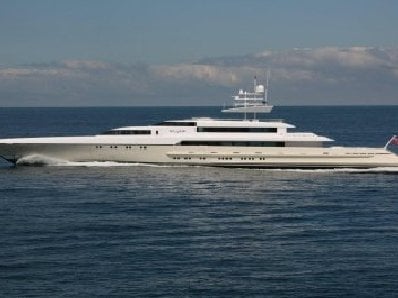 PHUKET: Beachgoers along Phuket’s west coast would have had a hard time not noticing a flotilla of superyachts massing in Nai Harn Bay this week then moving up the coast to Pansea Bay yesterday.

Leading the fleet, in Phuket for the annual Asia Superyacht Rendezvous, is the 74-meter MY Silver Zwei launched just last year.

The Silver Zwei is rated as the world’s fastest conventionally powered motor yacht and the longest yacht made from all aluminum.

In Phuket today, the yacht was one of the main attractions at the 2010 Dubai Yacht Show in March.

The Asia Superyacht Rendezvous is celebrating its 10th anniversary this year, and 10 years with world-renowned shipbuilder Feadship as principal sponsor.

The exclusive event brings together world-cruising superyachts, their owners, captains, crews and guests in an extravagant event where the focus is very much on fun and socializing.

Among the fleet are 50-meter S/Y Perseus built by Perini Navi in 2001; the M/Y Maverick II, built by Sterling in 1988; the Thailand-based 40.3m M/Y My Lady Arraya built by Oceanfast in 1990; the 36m S/Y Vie Sans Soucis built by Kings Yachts in Taiwan as well as M/Y Noble House, M/Y Major Affair and M/Y Callavino.

The first day of the event on Thursday saw the owners’ and captains’ briefing conducted by Race Director Andy Dowden and PRO Simon James at the Royal Phuket Yacht Club at Nai Harn, followed by a cocktail party hosted aboard MY Lady Arraya.

The first day “on the water” on yesterday began at a very civilized 10:30am with the S/Y Perseus having the honor of sailing first across the Nai Harn Bay start line, leading the fleet north to Pansea Bay.

The yachts are scheduled to stage another sailing event today before heading ashore to conclude the Rendezvous with a VIP “Boat International Media Group Gala Dinner” at The Surin Phuket.