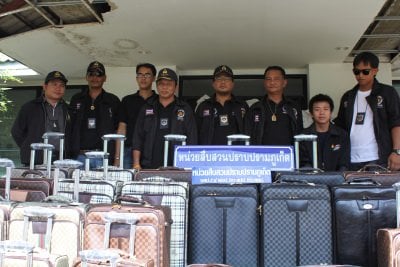 PHUKET: Customs Department investigators on Sunday intercepted a shipment of counterfeit luggage with an estimated street value of more than 900,000 baht, but no arrests were made.

At a press conference held at the Port Customs House yesterday, Phuket Investigation and Suppression Unit chief Jaroen Chamnigarn revealed that 351 copies of famous brand-name suitcases and bags were recovered in an operation the day before.

The shipment was awaiting collection at the offices of an undisclosed freight agency on the bypass road when his officers moved in and seized the luggage. No arrests were made because nobody appeared to collect the goods, the press were told.

“We watched the shipping company warehouse and waited for the consignment to arrive [by truck]. When it did, we found it consisted of boxes wrapped in white sacks,” he said.

Inside we found the counterfeit luggage, some the wheeled variety, others the hold-all type. All bore fake labels of famous brand names, said chief Jaroen.

The consignment was most likely smuggled into Thailand from another country, then shipped to Phuket by road from Bangkok.

“Normally, counterfeit products that are sent to Phuket arrive via a shipping service. When officers seize goods from one company, the importer switches to another to avoid further seizures. We have to check with all shipping companies in Phuket,” he explained.

Figures released by Phuket Customs House show that from January 2011 to January of this year, 24 consignments of counterfeit goods, with an estimated value of 2.8 million baht, were seized by customs officers.

“There are many smuggled counterfeit goods for sale in Phuket. The volume is not that much this time of year as it’s low season, but the amount generally increases during the high season. Customs officers are always searching and seizing counterfeit goods,” Chief Jaroen concluded.

Despite periodic seizures, counterfeit goods are openly sold year-round in retail outlets throughout the island, especially in areas popular with tourists. Most of the goods are understood to have been manufactured in China.

Man found dead floating in the sea with 13 stab wounds