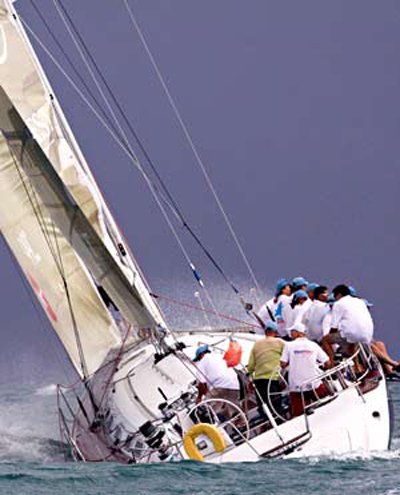 PHUKET: Cape Panwa Hotel Phuket Raceweek 2012 opens its doors tomorrow with a glittering first night party, sponsored by Mount Gay Rum, followed by the start of racing Thursday morning in what is forecast to be perfect ‘champagne sailing’ conditions.

Coming into its ninth year Phuket Raceweek comprises of four days of world-class yacht racing and four nights of beachside parties – all captured for international TV broadcast to more than 140 million households.

Raceweek, run over seven classes, will include Racing, Multihull, Cruising and Bareboat Charter. The regatta has gained a reputation for its competitive racing for the serious boats, and fun courses around islands for the less serious racers. It is also the first event on the 2012/13 Asian Yachting Grand Prix Circuit.

Entries, at 33 yachts, are slightly down on last year – on a par with this year’s Koh Samui Regatta and the main fleet at the Top of the Gulf Regatta – a reflection of the global economic scenario.

Yachts racing include the never-before-raced, Reichel Pugh design, Aquila RP45, Katsu, which arrived in Phuket only a few days ago. Built in China by Sino-Eagle, this 45ft yacht is an all-carbon, high tech pure racing machine.

Another first is the super-lightweight catamaran, Hurricane, launched on Monday and heading straight for the start line.

Coming by road from Pattaya, the smallest yacht in the fleet, at just 25ft and aptly named Brace! Brace!! Brace!!!, is a high tech Welbourne 25 sports boat that has raced only one other regatta and managed a third place on its first time out. They’ll be looking to better that result and are sure to provide some nail-biting moments for crew and spectators alike.

A youth sailing team, 91.5 FM-Sunsail Youth Racing, comprised of Thai youngsters aged between 10-15, from Sunshine Home in Phuket, will compete for the first time.
These youngsters have been learning to sail and race on small dinghies, but this will be their first time on a ‘big boat’ in an international regatta.

Participants are coming from all four corners of the globe, including Thailand, Singapore, Malaysia, Hong Kong, China, Laos, Vietnam, Australia, New Zealand, England, Netherlands, Germany, USA. And coming from the furthest corner of all is the skipper of the classic yacht, Idiom, who is flying in from Alaska to take part in the Seraph Classic Invitational Class, sponsored by the regatta’s oldest ‘lady’, the 106-year old Danish schooner, Seraph.