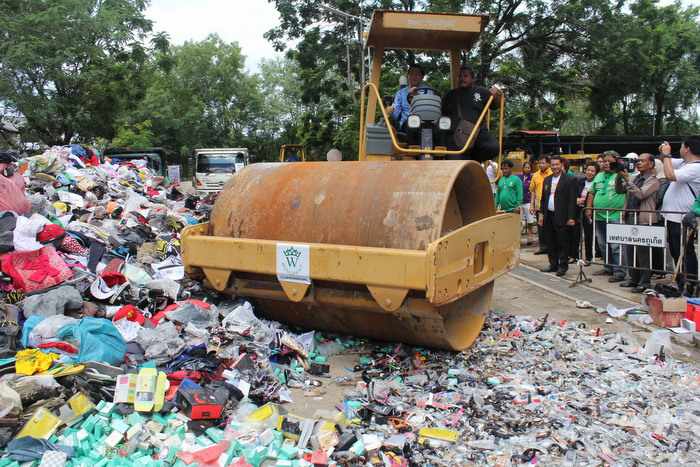 PHUKET: Nearly half a billion baht of counterfeit goods that were seized last year in Phuket and other provinces in Southern Thailand were torched at the incinerator in Phuket Town yesterday.

“This is the standard, final step in cases involving counterfeit products. After the case is closed and sentences are handed down, we have to publicly destroy the items,” said Kullanee Issadisai, acting director-general of the Commerce Ministry’s Intellectual Property Department.

“We do this to ensure the public that the goods will not find their way back to the marketplace.”

“The items destroyed [yesterday] were just the ones that were seized by Region 8 and 9 Police in Southern Thailand. The remaining items will be destroyed in Bangkok in August,” she said.

The police declined to name any of the suspects arrested in the raids.

“They are all out on bail and the case is ongoing. We will call them in for questioning one by one to determine if there is someone higher up in the counterfeit goods market that we can go after,” Col Khunnadet said.

“We will continue to work closely with the Department of Intellectual Property to eradicate all counterfeit goods from Patong.”