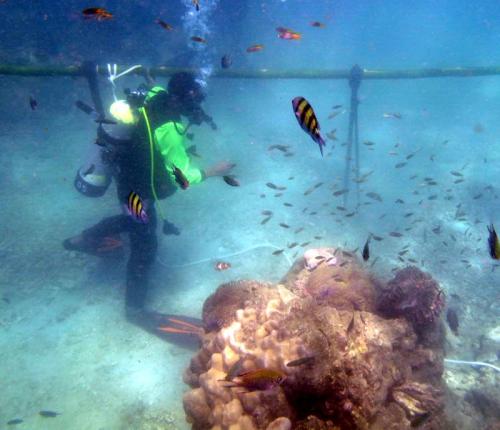 PHUKET: Corals allegedly damaged by a seawalking company off Khai Nai Island, east of Phuket, could take five to six years to grow back, explained officials as they inspected the decimated underwater habitat yesterday.

Over 300 square meters of coral were damaged to create a pathway for tourists to walk on the sea floor, said the Phuket Department of Marine and Coastal Resources (DMCR) Office Chief, Thanate Mannoi (story here).

“Today, we came to investigate the damage. More than 800 coral frags are still alive, but the restoration process will take at least five to six years, because the growth rate of coral is slow,” said Mr Thanate.

DMCR officials, working along with the Phuket Marine Biological Center, have already cleared the area of the “underwater rails” used by the seawalking company. Buoys have also been set around the affected area.

“Professional and volunteer divers are gearing up to help repair the coral on May 12,” he said.

“Corals are protected by the Wildlife preservation and Protection Act BE 2535, so the police will be involved in the investigation of the damage caused by the seawalking company,” said Mr Thanate.

In addition to the damaged allegedly done by the company, Mr Thanate explained to those present at the investigation that the local marine environment was facing many other issues, most notably marine dumping.

“Waste being dumped into the sea by tourists and fishermen is a serious problem,” he said.

“Mid-water waste is very deleterious because it effects the lives of rare sea animals such as dugongs, sea turtles and dolphins. These animals are likely to consume the waste and, unable to digest it, will later die,” Mr Thanata said.

“Everyone should take their waste back to shore and dispose of it properly. The DMCR is well aware of marine dumping and the consequences it brings, and we are currently working on solutions to this problem,” he said.