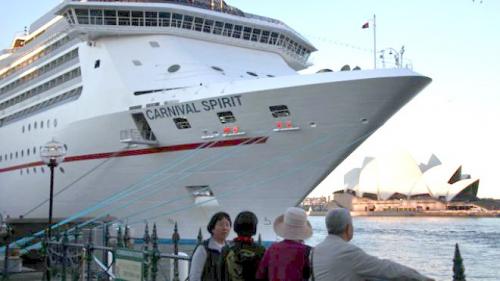 Police said surveillance camera footage from the ship showed the 30-year-old man and 27-year-old woman, both Australian, fell from the mid-deck around 8:50 p.m. AEST (1150 GMT) on Wednesday.

The pair were reported missing when the Carnival Spirit docked in Sydney on Thursday after completing a South Pacific tour.

“I must be honest, our hopes are fading because of the length of time but we are going full throttle to try find them,” NSW Police Marine Area Commander Mark Hutchings told Sky News television on Friday when asked if police believed the pair were still alive.

Hutchings said the couple had gone off the ship “one after the other”, but it was unclear whether they had jumped or fallen by accident.

Miami-based Carnival Corp, the world’s largest cruise operator, has been plagued by a series of high-profile problems in recent months.

In February, its Carnival Triumph cruise ship was adrift for five days in the Gulf of Mexico following an engine fire, stranding more than 3,000 passengers without electricity and adequate sanitation.

It is also coping with repercussions from the sinking of its Costa Concordia ship in Italy in January 2012, which claimed 32 lives.

The police did not disclose where the body had been moved.

The 26-year-old ethnic Chechen died in an April 19 gun battle with police, four days after he and his younger brother Dzhokhar are suspected of having set off bombs at the finish line of the Boston Marathon that killed three people and injured 264.

The question of where to bury the elder Tsarnaev had proven to be a thorny one, with city officials in Boston and in neighbouring Cambridge, where he lived, refusing to accept the body for burial.

His widow, Katherine Russell, had asked that Tsarnaev’s body be released to his family. An uncle, Ruslan Tsarni of Montgomery Village, Maryland, said on Sunday he had wanted his nephew to be buried in Massachusetts.

Russell’s attorney did not immediately respond to a request for comment. Tsarni could not be reached.

A crowd had picketed outside the Worcester Graham Putnam & Mahoney funeral home where the body had been held since it was claimed from the medical examiner last week.

Dzohkhar Tsarnaev, who faces the possibility of the death penalty if convicted on charges related to the April 15 bombings, is being held at Fort Devens, Massachusetts. He was moved there on April 26 after nearly a week in a Boston hospital where he received treatment for wounds sustained in the gun battle that left his brother dead.

Tamerlan died of gunshot wounds as well as blunt trauma to the head and torso, which resulted from both an exchange of fire with police in Watertown, outside Boston, as well as injuries that resulted when his brother drove over him as he fled.

Separately on Thursday, the family of the youngest victim to die in the attack – 8-year-old Martin Richard, who was standing by the finish line when the bombs went off – said that their 7-year-old daughter Jane was showing improvement, with surgeons at Boston Children’s Hospital closing the wound left when the blast tore off her left leg below the knee.

“By closing the wound, the incredible medical team at Boston Children’s Hospital laid the groundwork for Jane to take an important step forward on the long and difficult road ahead of her,” the family said in a statement. “We take today’s development as positive news.”


British sailing champ dies in America’s Cup training off California
Reuters / Phuket Gazette
PHUKET: British yacht-racing champion Andrew “Bart” Simpson, who won a gold medal at the 2008 Summer Olympics in Beijing, was killed on Thursday when his vessel capsized in San Francisco Bay during training for the America’s Cup, his team said.

Simpson, 36, a two-time Olympic medallist, had been sailing on the Artemis, Sweden’s entry in the America’s Cup, when the catamaran overturned, according to a statement posted on the Artemis racing website.

“The entire Artemis Racing team is devastated by what happened,” CEO Paul Cayard said in the statement. “Our heartfelt condolences are with Andrew’s wife and family.”

The Artemis website said Simpson was part of an 11-member sailing team and that all other crew members had been accounted for following the mishap.

A U.S. Coast Guard officer, Pam Boehland, said support boats had pulled 12 crew members from the water, and that one was taken to a San Francisco hospital.

San Francisco Fire Department spokeswoman Mindy Talmadge confirmed that one male crew member had died in the accident and said he was estimated to have remained under water for 10 to 15 minutes before he was recovered.

She said one other sailor from the Artemis crew was taken to a hospital for treatment of minor injuries and later released.

Boehland said the Artemis capsized at about 1 p.m. local time (9:00 p.m. British time) northwest of Treasure Island in San Francisco Bay. The crippled vessel remained in the bay, and the Coast Guard established a 100-yard (91-meter) safety zone around the boat, she said.

The wreck was at least the fourth major accident in just over a year off the California coast or involving California vessels.

In March, a crew member was killed when a 30-foot (9-meter) sailboat broke apart in rough seas during a race near San Clemente Island.

In April 2012, four crewmen in a race from Southern California to Mexico died after their yacht ran aground. Two weeks earlier, five sailors died in a racing accident near the Farallon Islands off the coast of San Francisco.

The Farallon incident prompted the Coast Guard to temporarily suspend racing in the Pacific Ocean off northern California.