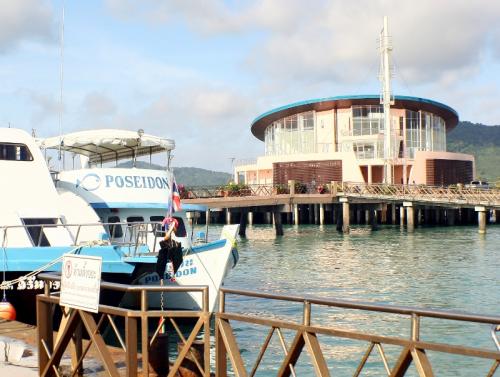 PHUKET: With the long-awaited “one-stop center” for all yachts arriving in Phuket one year overdue, officials have now announced the complex is on track to open in 2015.

The 70-million-baht rotunda-style building stands proud in Chalong Bay (map here), but remains to be occupied by the relevant agencies for yacht arrivals to clear immigration, customs and the harbor master.

In December 2011, the Phuket Marine Office declared the the 44-slip Chalong Bay Marina “90 per cent complete” and the one-stop shop ready to open by 2012 (story here).

However, the Marine Office announced yesterday it was spending 15 million baht on a GPS registration system that will be mandatory for all yachts in Phuket. Additionally, a seawall will be built to shelter yachts in the still-incomplete marina.

Both must be complete before relevant agencies will be allowed to move into the new building, Phuket Vice Governor Chamroen Tipayapongtada explained at a Provincial Hall meeting yesterday.

Phuket has more than 3,000 yacht arrivals and departures each year. To keep track of yacht activity, SDA Group Co Ltd is installing a GPS registration system at a cost of about 15 million baht, Sakorn Pukham of the Phuket Marine Office admitted.

“Every yacht arriving in Phuket will have to log in to this GPS system so we can track the vessels whereabouts. The control center will be at Chalong Pier with relay towers in Chalong, Patong and Thalang,” he said.

“Any arriving yachts that do not have the required GPS equipment on board will have to pay a deposit in order to be provided basic GPS equipment. The deposit will be refunded on the yacht’s departure when the equipment is returned,” he said.

The amount of the deposit has yet to be determined, Mr Sakorn said.

“The GPS system is to be operational by October 22 this year,” he added.

Meanwhile, Golden Plan Co Ltd is drawing up plans to build a seawall to protect yachts in the marina from waves, Mr Sakorn said.

“In all, the marina is scheduled to be fully operational by mid-2015,” he said.

Phuket Provincial Administation Organization (PPAO) President Paiboon Upatising, also at the meeting, urged the Marine Office to make sure the marina was a “well-organized facility”.

“It will take about two years to finish the seawall. In the meantime, I would like to urge the Marine Office to organize the marina well, so yachts will use the pier and associated facilities,” he said.

“The PPAO is doing its part. We provide good services to everyone who uses our facilities, and we are currently collecting more than a million baht per month in fees levied at Chalong Pier,” he added.

The Phuket Treasury Office is currently the custodian of the marina, explained Thamrong Thongtan, chief of that office.

“The building itself is finished, but it has yet to be transferred to the PPAO because the whole project is not yet completed.

“Once the GPS system and the seawall are complete, the building will be transferred to the PPAO so they can rent out space in the building to the relevant agencies [Immigration, Customs, Marine Office] who will set up offices there,” he said.