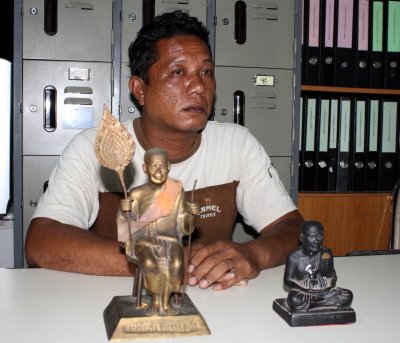 PHUKET: Phuket Police on Sunday arrested a thief who tried to return two stolen religious relics to their rightful owner, claiming they had brought him bad luck.

News of the arrest came at a press conference at Chalong Police Station yesterday afternoon.

Presented as evidence were two figurines: one a 1962-issue figurine of the revered Phuket monk Luang Por Cham produced at Chalong Temple, the other of Luang Pu Tuad, from Chang Hai Temple in Pattani.

The investigation, led by Chalong Police Crime Suppression Inspector Lt Col Pachai Mattayan, began with the report of the theft of the statues by management of the Rattana Beach Hotel, located near Karon Circle.

Prasat Sanit, 51, reported to police that the two statues went missing from the hotel kitchen on August 31 and that Mr Janya, recently hired as a cook, was the prime suspect.

The big break in the investigation came at 8pm on Sunday, when Mr Janya called the hotel owner and explained that the two objects had caused him nothing but bad luck since the day he stole them.

Wanting to make amends by returning them, he arranged a meeting in front of the Phuket Shooting Range in Rawai.

When the cook arrived with the statues in hand, he was arrested in short order by Chalong Police officers, who were hiding out nearby.

Mr Janya confessed to stealing the statues, which he intended to sell to a black market dealer in Bangkok for 2,500 baht.