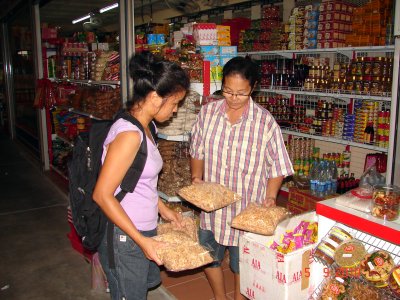 PHUKET: The new market on Ranong Road finally opened for business on Sunday, despite the refusal by a handful of holdout vendors to sign the contracts and occupy stalls they are entitled to.

On the ground floor are stalls selling fresh meat, seafood and dry foods.

Below, in the basement level, are small restaurants and vendors selling fresh fruit and vegetables.

Surrounding the main market areas on both levels are stalls selling a variety of dry goods, souvenirs and snacks.

The third and fourth floors are dedicated to parking.

The entire project, including construction and relocating the vendors to a temporary market during the building period, has so far cost Phuket Town Municipality some 280 million baht.

The municipality must repay a bank loan taken out to fund the project.

Despite the huge outlay, the completed structure sat vacant for over a year while the vendors and municipality negotiated over lease agreement terms and construction costs for purpose-built stalls, the cost of which had to be paid by the vendors themselves under the terms of the agreement.

Phuket City Mayor Somjai Suwansupapana was eventually able to persuade nearly all of the vendors to move in by resolving the issues through discussions at several public hearings over the past year.

The new facility replaces the squalid, rat-infested market that ran continually at the same site since World War II.

Phuket City Mayor Somjai Suwansupapana is expected to announce when the official opening ceremony will be during a press conference scheduled for tomorrow.

For a detailed report on the issues that have delayed the market opening, see our previous story here.