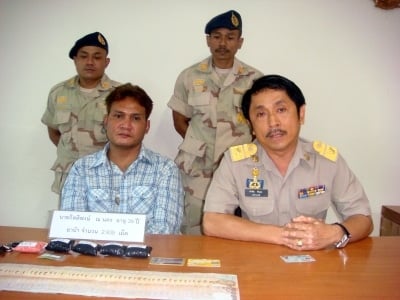 PHUKET: The Kathu Narcotics Suppression Unit arrested a Bangkok-based drug dealer in Phuket Town on Monday morning, seizing almost 3,000 ya bah (methamphetamine) pills and a Mercedes-Benz as evidence. It was the third drug arrest for the suspect, who was only recently released from jail

The arrest was announced at 1pm the same day by Kathu District Chief Siriphat Phathakul.

The raid leading to the arrest took place at room 205 of the Thidarat Apartment complex on Soi Surin 1 in Phuket Town.

Undercover officers approached the room after arranging to buy a quantity of ya bah from the suspect, later identified as 39-year-old Kittipong Na Nakorn of Bangkok, he said.

Mr Kittipong confessed to using the car to smuggle ya bah from Bangkok onto the island through the Tah Chat Chai checkpoint.

He had made the run many times, stashing the drugs away in the cars loudspeakers, he said.

Mr Kittipong was arrested twice before on drug charges and was only recently released from prison, District Chief Siriphat said.

The Kathu Narcotics Suppression Unit would continue to investigate to learn the identities of other members of Mr Kittipong’s network, he added.