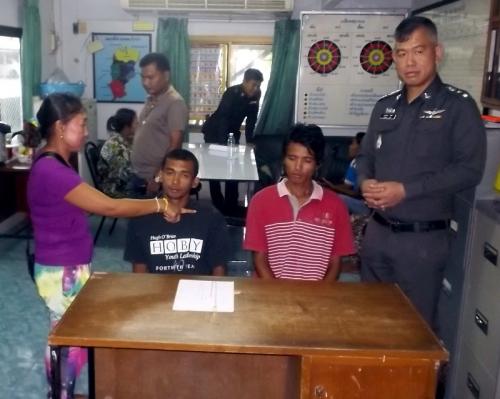 PHUKET: A pair of snatch-thief convicts were snapped up by police shortly after they ripped two gold necklaces from the neck of a woman taking her child to school in Phang Nga this morning.

After her necklaces – worth about 30,000 baht – were stolen, Waroon Chaisang called the police, who notified officers at a checkpoint down the road in the direction the men were last seen heading.

“Officers at the checkpoint were ready, but the two thieves didn’t stop,” Takua Pa Police Superintendent Khemmarin Hutsiri. “Racing on with police in pursuit, they got as far as a rubber plantation, where they ditched their bike and started running.”

Police gave chase and caught up with Kiatthichai Taiwang, 28 and Thaet Chaichana, 26.

Both men are fathers of young children, Col Khemmarin said.

“They said that they had to steal the gold to buy milk for their kids,” he said.

Nonetheless, police records revealed that the pair had recently been released from Phang Nga Provincial Prison, where they’d been incarcerated for snatch-thefts.

“We charged them with using a motorbike to steal, and we returned the necklaces to Mrs Waroon,” he said.